After Sergio Thompson pulled off the major upset on March 31 by stopping the heavily favored, Jorge Linares, he broke down in tears. Not only had he defied the odds, but he was now on the verge of a world title shot. 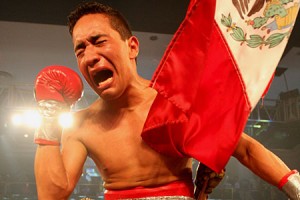 Linares-Thompson was billed as a WBC eliminator with the winner getting a July shot at lightweight champ, Antonio DeMarco. Apparently, though, it was only an eliminator if Linares wound up the winner. When Thompson flipped the script and stopped Linares in the second round on cuts, things obviously changed.

It took a few days to find a way out of a low profile, therefore low sanctioning fee, DeMarco-Thompson title fight, but the WBC predictably wormed its way out of its bind.

Jose Sulaiman, WBC President for Life, would inform the media on Wednesday that the Linares-Thompson bout was indeed an eliminator, but not a “final” eliminator.

“Linares was the one who lost his chance to fight DeMarco,” Sulaiman would say. “Thompson was number 16th on the charts and he won overwhelmingly, but he can not climb the pole directly to one. The ratings committee will find a good position for Sergio and later he may be appointed as the challenger.”

Of course, all this begs the question of why a 16th ranked contender was even fighting an eliminator in the first place– especially if he would be ineligible to actually take the title fight should he win.

Could this be a case of the July title shot being a, paid-for, reserved property of Golden Boy promotions? It certainly looks this way.

Golden Boy’s Linares was going to get another crack at DeMarco on July 7 at the Home Depot Center in a rematch of Linares’ bloody TKO ll loss to DeMarco last October. Showtime was going to televise the rematch with the opening slot on the card reserved for Golden Boy’s Gary Russell Jr. in his first real, main stage showcase fight. All in all, it was shaping up to be a big night for the promotional firm founded by Oscar de la Hoya.

Without Linares in the main event, there’s  no Gary Russell Jr., no Home Depot Center, no card. Now, there’s no WBC.

DeMarco will be allowed to make an optional defense while Sulaiman’s outfit sorts things out and shuffles papers around.

As for Thompson, well, he’ll have his name shoved back in the fish bowl like an unlikely raffle winner never meant to actually win the prize.

Sulaiman has gone on record as saying that one of his goals is to promote Mexican boxing and the Mexican fighter. Thompson, despite the American last name, is as Mexican as they come. This move shows the world where Sulaiman’s real loyalty rests. Patriotism is fine, money is better.