Main Events Promotions officially announced the headliner for the third installment of the Fight Night Series airing June 16 from the Prudential Center in Newark, NJ on the NBC Sports Network. Heavyweight contenders, Tomasz Adamek and Eddie Chambers will meet in a battle of former heavyweight title challengers both looking to earn another opportunity at a title shot. 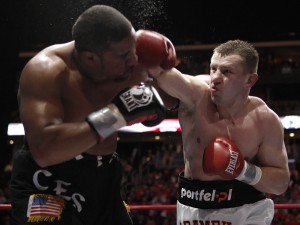 Adamek 45-2 (28 KO) recently made his comeback on the second Fight Night card March 24 when he defeated Nagy Aguilera by lopsided decision. It was Adamek’s first bout since getting stopped in ten rounds in a one-sided loss to WBC Champ Vitali Klitschko. Adamek hurt his hand in the Aguilera fight. It was thought to be broken, but later showed just bruises and he should be ready to go for June 16.

Adamek is a former Light Heavyweight and former undisputed Cruiserweight Champ. Adamek then stepped up to heavyweight where he earned wins over Jason Estrada, Michael Grant, and Chris Arreola.

Chambers, 36-2 (18 KO), will be making his first appearance in the ring since March 2010 when he won a unanimous decision over Derric Rossy. Chambers was scheduled to headline the first Fight Night card in January against Sergei Liakhovich, but pulled out six days before the fight with a rib injury. Prior to the scheduled bout with Liakhovich, Chambers was slated to face Tony Thompson last year in a title eliminator, but had to pull out with a back concern.

Despite the injuries, Chambers remains an undersized but dangerous opponent for any heavyweight not named Klitschko. Chambers is barely over 200lbs at his best fighting weight, but his fast hands and slick skills allow him be effective against larger fighters. Against Adamek he will not be facing much more than a ten to twenty pound differential.

Chambers’ only two losses came in a points decision to Alexander Povetkin in early 2008 and then, two years later, he was dominated and stopped in the closing seconds of the twelfth round by Wladimir Klitschko. The Rossy fight is the only fight Chambers has had since the Klitschko loss. Chambers’ biggest wins have come against Alexander Dimintrenko and Samuel Peter.

The headliner fits the goal that NBC and Main Events have set regarding televised bouts being evenly matched. Chambers’ speed and skill will present an interesting style match to Adamek’s underrated skills, rugged toughness, and solid chin.

Adding to the intensity of the match will be a mixed crowd with strong rooting interests. Adamek will have home field advantage as he regularly fights at the Prudential Center in North Jersey where leagues of his Polish faithful turn out decked in Polish flags and scarves, loudly cheering their man. Chambers ,who is from Pittsburgh but has become an adopted part of the Philadelphia boxing scene, should also draw a crowd with the Philly boxing faithful making their way up the turnpike for the event.

Bryant Jennings, who has grown from local Philly prospect to full blown heavyweight contender on the Fight Night series, is slated to be in the co-main event against an opponent TBD. Jennings filled in on six days notice when Chambers dropped out of the first Fight Night card, defeating fellow undefeated prospect Maurice Byarm. Then, in the second card Jennings pulled an upset by absolutely dominating former WBO Heavyweight Champion Sergei Liakhovich to a ninth round TKO.

The televised fights begin at 9pm on the NBC Sports Network.

Question, comment, agree, disagree, or anything at all, send it to gboxing3@gmail.com.