Argentina’s Marcos Maidana (31-3, 28 KOs) is an entertaining fighter who lives on the fringe of the junior welterweight elite as a heavy-handed slugger capable of taking anyone out on any given day. However, the former WBA 140 lb. world titlist obviously wants more than just a puncher’s chance against the elite of the sport. So, he’s moving his entire operation to Oxnard, California to work with The Boxing Tribune’s 2011 Trainer of the Year, Robert Garcia. 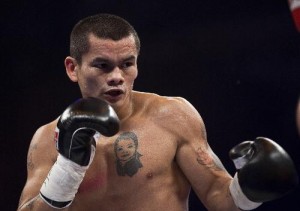 Garcia, who also trains Nonito Donaire, Brandon Rios, Antonio Margarito, Kelly Pavlik, and younger brother, “Mikey” Garcia, will be looking to smooth out the rough edges of the Argentine battler and add some method to the fighter’s moxie.

Principally, Garcia will have to focus on Maidana’s poor footwork and wide-swinging tendencies– two deficiencies which have limited the fighter’s progress in the sport and have been exploited on every occasion he has stepped up his level of opposition.

Maidana hopes to return to the ring in June and erase the bad taste in his mouth from a February shutout decision loss to Devon Alexander at welterweight.