Former lightweight titlist Brandon “Bam Bam” Rios (29-0-1, 22 KOs) and an over-matched Richard Abril (17-2-1, 8 KOs) will face off for the one of the WBA’s lightweight titles on Saturday, April 14 at the Mandalay Bay Resort and Casino and will be the co-feature to the main event featuring Juan Manuel Marquez versus Serhiy Fedchenko. 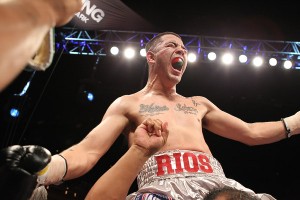 The much-documented press tour for the failed Brandon Rios-Yuriorkis Gamboa fight brought plenty of attention to rising star Brandon Rios, and just as much to the little-known Richard Abril. Abril, who serendipitously appeared at the Miami press conference for Rios-Gamboa to crash the party and throw down a challenge to Rios, won the vacant WBA Interim lightweight title last October, scoring a unanimous decision win over former WBA lightweight belt holder, Miguel Acosta.

Rios is one of the more exciting young fighters in the sport today. Rios makes up for his lack of speed with an iron will and genuine love of inflicting damage on his opponent. He easily handled Anthony Peterson to earn a shot at one of the WBA’s lightweight belts in 2010, forcing  Peterson to resort to low blows before he was disqualified. He then went on to man-handle club fighter, Omri Lowther before facing Miguel Acosta for the belt. Rios was badly out-boxed in the early rounds, but his constant pressure and body attack wore Acosta down late before Rios stopped him in the tenth round. Last July, Rios battered the always tough Urbano Antillon, knocking him out in three rounds. In his last fight, Rios, who lost his title on the scales, stopped John Murray in eleven.