On Saturday night at Belfast’s Odyssey Arena Tyson Fury continues his progress up the heavyweight ranks when he takes on Irishman Martin Rogan over twelve rounds. 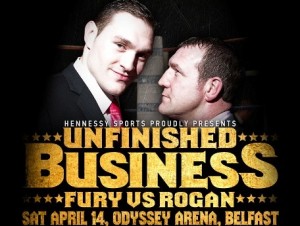 At the time of writing the fight will decide the All-Ireland heavyweight championship, but there appears to be some confusion over whether the Irish boxing authorities will sanction the contest because their rules require a ten round contest and a single judge, whereas the promoter Mick Hennessy and his television paymaster Channel Five have the contest scheduled for twelve rounds and three arbiters.

Regardless of the dispute, the battle has stirred the blood of the Irish fight-public. Fury, the young 23 year old with 17 wins and no losses to his name, has made much in the build-up of his Irish ancestry, going as far as having his supporters produce an affidavit to the effect that his grandmother was Irish, whilst Rogan has poured scorn on Fury’s claims and maintained that he’s the only home fighter. “Tyson Fury is a fake” he said, “and I’m going to smash him up for all of the people in Belfast”.

Notwithstanding the Irish furore, young Tyson has shown in his last few outings enough shortcomings to give the contest a bit of spice, even if Rogan at forty years of age and inactive for a year and a half should by all rights be out of his depth. The Ulsterman is a strong and willing adversary, and in his short sixteen fight career has had some barnstorming tear-ups with the likes of Matt Skelton and Sam Sexton, as well as winning the inaugural heavyweight Prizefighter tourney as a seven fight novice back in 2008. His most creditable win was a points verdict over the since disgraced Audley Harrison (before Audley capitulated without throwing a meaningful punch against David Haye.

Rogan will be giving away six inches in height to the 6 feet 9 inch Fury, and a similar reach disparity. He is strong, tough and resilient, and Fury will have his hands full with him. In his last fight, Tyson was decked in the second round by the crude and ungainly Neven Pajkic, who makes Rogan, who fights face-first and footwork-free, look like a fistic ballerina. Fury has shown in the past a worrying tendency to get involved in scraps he doesn’t need to, if only he’d make best use of his physical advantages and developing skills.

The boy remains a work in progress, however, and has to learn some discipline before he moves into proper world class. It’s been widely publicised that he ballooned in weight after his last fight by some five stones (70 lbs.), and he has been known to be an errant trainer. This time, he says, he means business;

“I’m in better shape now than all of my previous fights put together. I want to make a statement in this fight and prove my critics wrong. I’m going to reveal a new side of Tyson Fury and prove I’m ready for the Klitschkos”

Rogan, on the other hand, believes that Fury is looking past him and not taken his preparations seriously:

“He’s a balloon and that is a nonsense” said the Irishman, “He is still out of shape and I am going to take him apart.”
On the undercard Chris Eubank Jnr, the 22 year old son of Britain’s former super-middleweight maestro, makes his third professional appearance when he takes on Scotsman Paul Allison. Allison, also 22, boasts a 5-1, 1 KO record with one draw, but will be hard pushed to make a dent in the irrepressible Eubank, who brings to the ring all the chutzpah his father used to.