The Irish fight-followers who packed the Odyssey Arena in Belfast tonight were treated to a barnstormer when heavyweight prodigy Tyson Fury, newly reinvented as a southpaw, took apart tough Irishman Martin Rogan in just five rounds. 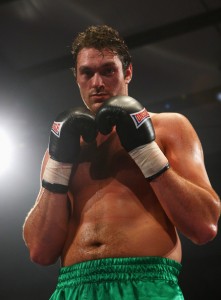 There had been plenty of confusion in the 24 hours before the fight when Rogan claimed at the weigh-in that Fury’s people had attempted to pull a contractual stroke and have him sign an amendment agreeing that the fight be over twelve rounds. Rogan seemed to suggest that his fight contract stipulated a ten round contest, the mandated distance for an Irish heavyweight title fight, and stormed out of the building shouting at the top of his lungs that he’d been duped.

For a few hours the contest itself had appeared to be in jeopardy, but eventually the Irish boxing authorities, Rogan himself, and Fury’s people, managed to reach agreement (doubtless spurred on by the commercial imperatives involved) and the fight went ahead scheduled for the championship distance and for the Irish title.

If Rogan had looked pent up at the weigh-in, he came into the ring a-grumbling and a-prowling like a caged animal, and when Fury joined him between the ropes the 23 year old looked a little discomfited by the Irishman’s antics, and one wondered if Rogan might not have psyched Fury out of things.

Not so – Fury had weighed in at a lightest ever 17 stone 7 pounds, and at 6 feet 9 inches tall he towered over the bull-like Rogan – at the first bell, young Tyson sprung a huge surprise by coming out as a lefty. For two rounds he poked out a right jab behind a high guard, and generally allowed Rogan to rush at him chucking ponderous right hands. As early as the third round Fury’s reach advantage was apparent, and he be began to counter Rogan’s attacks with that jab, tying his opponent up and leaning down heavily on his shoulders when he got too close. At the end of the third Fury whipped over a left hand which caught Rogan flush and down he went. Rogan was smiling and on his feet quickly, but Fury had shown he had the tools for the job. In the fourth more jabs reddened the Irishman’s eyes and nose, and he began to strike a forlorn figure as Fury stepped up the pace. Finally in the fifth, Fury began to switch his assault to the body, eventually catching Rogan with a thudding left hand to the ribs. Rogan folded against the ropes in some pain, and barely beat the count. However, his corner had seen enough and trainer ?? leapt into the ring before the referee could intervene.

Afterward, and despite some bad blood pre-fight, Fury was magnanimous in victory, and made a point of raising Rogan’s hand for the Belfast audience. He was asked why he’d converted to southpaw:

“I was just practicing a few things in there – I was comfortable right-handed. I’m a world-class heavyweight and I can do these things. I’m ambidextrous – it worked in the gym and Martin Rogan was the kind of fellow I could practice on. Martin Rogan is a true Irish warrior. I hope to bring big world title fights to Belfast. I’m in the best shape I’ve ever been in. There were a lot of fans here tonight. Martin’s an honourable man. I’ve done an awful lot of talking in the past but I’m going to let my boxing do the talking from here on.”

Fury, now 18-0, 13 KO’s, has promised to stay busy, going as far as to say that he intends to fight “a bum a month” as he seeks to build experience before stepping up to challenge one of the Klitschko’s. Too many more showings like this one, even allowing for the opposition (surely Martin Rogan must now retire), and Fury might find the clamour for an early Klitschko challenge too alluring to resist. One suspects that Wladimir’s fragile psyche would be severely tested by Tyson Fury in his current mood, and it may be Vitali who steps into the breach.

On the undercard Chris Eubank Jnr won his third professional contest under the watchful eye of his irrepressible father, but was extended for four rounds and took some heavy shots from Scottish novice Paul Allison. The six fight unbeaten Allison came to win, but ultimately the 22 year old Eubank was too fast and furious for him, and stopped him with a devastating combination.