With a pending date against Nonito Donaire in July, two-time super flyweight champ, Cristian Mijares (44-6-2, 20 KOs) will take on Colombian journeyman, Eddy Julio (13-3-1, 11 KOs) in a twelve round junior featherweight contest this Saturday at the Unidad Deportiva Centenario in Morelia, Michoacán, Mexico. Mijares was originally scheduled to fight two weeks ago against the much tougher, Cruz Carbajal, but scheduling conflicts forced a rescheduling and the signing of a new opponent. 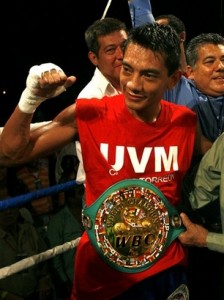 Mijares, who is making his official debut at the 122 lb. limit, fought his last two bouts at featherweight, but achieved his greatest success as a super flyweight. In his two runs as 115 lb. world titlist, the native of Gomez Palacio, Durango, Mexico, is 9-1 in world title bouts with the lone defeat coming at the hands of Vic Darchinyan in 2008.

Above the super flyweight limit, Mijares has not excelled. The 30-year-old southpaw dropped two decisions to Nehomar Cermeño in a 2009 bid for a WBA interim bantamweight title and, after briefly capturing the IBF super flyweight title belt in 2010 and vacating it one defense later, has scored back to back wins against marginal opposition at the featherweight limit.

Julio has lost two of his last three contests, most recently being stopped in seven rounds by Mexican, David De la Mora in December. The Colombian was also stopped in ten rounds by Ricardo Cordoba in his only other fight of note.