Emerging Philadelphia lightweight, Angel Ocasio 6-0-1 (1 KO) is known as much for his intelligence and polite manner as he is for his talent and skills in the ring.  He approaches life with high expectations while maintaining gratitude for his talent and what he has achieved in life.  In speaking with the young fighter it becomes evident that whether he is successful in boxing or not, he will be very successful in life. 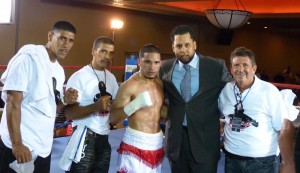 Friday night, Ocasio will seek to fix the one blemish on his record from a draw with Jason Sosa 4-1-2 (1 KO) this past January.  Ocasio and Sosa fought to a draw in a six round co-headliner from the National Guard Armory in Philadelphia.  Both fighters felt they won and were happy to return to the Armory in an immediate rematch.  This time they will headline the card in an eight round affair.

Like many fighters, Ocasio was introduced to the sport by his father, who still trains him today.  Angel Ocasio Sr. took his son to the famed Front Street Gym and it was here he would begin his fighting career.

“My dad has always been a fan of the sport so at the age of six years old he took me into the Front Street Boxing Gym.  Walked up the flight of steps and I just remember going right to the speed bag and just trying to hit it and learning.  He’s like ‘want to join?’  I was like sure, why not.  Had my first amateur fight at the age of ten and that’s when it all really started from six to ten.  Had a good amateur career up until I turned professional.  Now I’m here.”

Ocasio had options other than fighting.  He was a talented football player and an honors student in high school.  He had scholarship offers from colleges, but after a solid amateur career he decided boxing was the path he wanted to pursue.

“Amateur record, I had a good one.  Close to fifty fights.  I recall losing about four or five fights throughout my amateur career.  Won the Pennsylvania Golden Gloves about three times, silver gloves, went to the international ringside tournament, won that three nights straight.  Went overseas to Ireland to fight.  Pretty extensive amateur background.  Really no major national tournaments throughout my open class career because I turned pro like two, three fights into open class.  Amateur wise got a lot of experience with left handed fighters, right handed fighters, awkward fighters.  I feel it helps me out a lot in the professionals.”

Ocasio, now twenty-two years old, turned pro at twenty years of age.  He talked candidly about the experience of entering the ring without headgear for the first time in the payed ranks. Despite his nerves he found the pro style far more fulfilling than his amateur experience.

“For my first fight I remember it pretty vivid.  It was a lot of nerves.  I was very nervous for that fight.  Even through rounds it was kind of weird.  Even though I felt it was much easier and way more calm than the amateurs.  I felt as though in the amateurs you had to beat all the judges, the referee, and all the politics and everything.  I felt real free in the professionals.”

Ocasio started well through his first five fights learning the pro game.  He notched a win over talented local fighter Osnell Charles in his second fight.  But many ringside observers noticed a change in Ocasio during his sixth fight when he took on Rasool Shakoor.  In his previous bouts Ocasio looked good, but against Shakoor he looked like a true prospect.  Showing a stronger and leaner physique he dominated in his first six round bout and had all the signs of an emerging prospect.

“Second fight came around vs. Osnell Charles who’s a decent fighter.  That’s when I really got my feet wet.  He was pretty experienced, had a good amateur background and I pretty much dominated that fight.  Then from there I just fought tough opponents.  It’s pretty funny because every fight I just got more comfortable.  Now it’s just pretty much a job even though I work a full time job and make the best out of it.  Turn training into fun, have fun with it.

“That (6th fight vs. Shakoor) was a changing of a chapter in my boxing career.  I took training to a whole other level for that fight.  That was my first six round fight.  It was just comfortable.  Training camp felt perfect for that fight.  Ya, that was definitely a chapter change in my career and I felt as though I developed and I became a much more polished fighter.”

Most fighters at this stage of their career are not earning enough through fighting to pay the bills. Ocasio balances the rigors of training with a full time job with ESRN Court Reporting.  He is thankful his youth allows him to train and work, but looks forward to making boxing his sole responsibility.

“It’s pretty rough because to get into boxing you have to take it serious.  It has to be a full time job.  Right now I’m young, I’m twenty-two, so I have the energy to get away with working a full time job.  But hopefully in the near future I get good sponsorships so I don’t have to work anymore.  You got to get up pretty early to do your roadwork and stuff, but right now my body has adapted well to it.  Pretty much comfortable and stuff the way I’m training but training would be easier if I didn’t have a full time job.  At certain times of the day it’s rough but, at the end of the day it’s life and you got to make the best of it and get through it.”

Following the Shakoor Fight, Ocasio was scheduled for his biggest test thus far.  He would take on the gritty Jason Sosa in a battle of the bridge with Ocasio from Philadelphia and Sosa from neighboring Camden, NJ.  Sosa is known as a strong fighter with the one loss on his record being to a well-regarded prospect.  Ocasio was anxious to show he could step up to better competition and Sosa was looking to show he belonged among the names of local talented up and comers.

The two young fighters put on a solid scrap for the fans, but were unable to provide a definitive ending.  One judge ruled for Ocasio but two judges scored the fight a draw.  Ocasio was favored in the fight but in his opinion he was not at his best that night.

To win the rematch, Ocasio will have to do more than simply use his boxing skills.  Sosa is a pressure fighter and holds the advantage many pressure fighters enjoy that judges often score rounds for the fighter moving forward.  Ocasio talked about combating his opponent’s strengths and being fully ready for the rematch.

Pressure or not, Ocasio knows he needs to win this fight and badly wants to come out on top.  He was unable to decisively defeat Sosa in January and now gets the opportunity for immediate redemption.

“Every fighter should have something to prove every fight but this fight is pretty much redemption to show people that I am a better fighter than Sosa even though it was a draw.  It gave us both a good opportunity.  Redemption, rematch, and showcasing Angel Ocasio’s not a fluke.”

If Ocasio can get past Sosa Friday night he wants to have a bright future.  He talks about a desire to be more than just another local Philly fighter and wants to earn everything he can from the sport of boxing.  He has begun learning the business as well by doing recruiting for the promotional company that represents him, Makboxing, but for now is mainly focused on achieving the high expectations he sets for his future.  It is a future that should be successful in boxing and equally successful in life outside of the ring.

“Ultimately, I want to become a world champion within the next few years.  If push comes to shove and that never happens, I want to live a comfortable life.  I don’t want to be just another club fighter from Philadelphia that people walk by me and like; he fought a couple fights but didn’t make anything out of it.  When I get out boxing I want to have a few houses.  I want to live a comfortable life and have something to show for everything that I put into boxing.

“I’m just a normal guy from Philadelphia, man, that just wants to put on a show for the fans.  I want to make everything out of boxing; I don’t want to live the average life.  I want to live comfortably.  I want to succeed in the sport of boxing.  Also, boxing has shaped me to be the person that I am outside the ring.  I’m just not a fighter.  I’m probably the easiest person to ever get along with.  I don’t walk around knowing I can fight, picking fights.  I graduated with honors out of high school.  I could’ve probably went to any college I wanted in the city but I decided to take boxing serious.  This is something I want to do long term and make it a career and make the best out of it.  Just want to thank everyone out there that supports me and appreciates everything I do.”