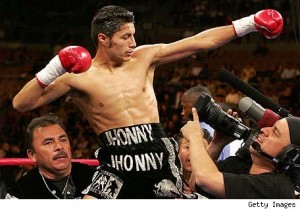 Gonzalez, who also had a two-fight reign as WBO bantamweight champ, won his current WBC strap by stopping Japan’s Hozumi Hasegawa in April of 2008 in Hasegawa’s hometown of Kobe, Hyogo,Japan. Since the fourth round stoppage of Hasegawa, the resident of Mexico City has made successful defenses via early stoppage against Tomas Villa (TKO 4), Rogers Mtagwa (TKO 2), and Roinet Caballero (KO 2).

Over the course of his thirteen-year career, Gonzalez, 30, has gone 7-3 in world title bouts and has also been in the ring with the likes of Mark Jonson, Fernando Montiel, Israel Vazquez, Irene Pacheco, Gerry Penalosa, and Toshiaki Nishioka.

The 29-year-old Rojas, from the Dominican Republic by way of Brooklyn, NY, captured the WBC featherweight title from Japan’s Takahiro Ao in 2009 and made one defense, against Guty Espadas Jr. seven months later, before relinquishing the title due to hand injury. Rojas was later named “Champion in Recess” by the WBC and guaranteed a title shot as soon as he was healthy.

Rojas lacks the resume of Gonzalez, but is likely the best overall fighter Gonzalez has faced since beating Hasegawa for the WBC 126 lb. title. Aside from Ao and Espadas Jr., Rojas has also been in the ring with Hector Velasquez and Johnnie Edwards. His sole loss came against Gamaliel Diaz vis close split decision in 2007.

The 27-year-old Salgado, from Mexico City, is actually a two-time super featherweight titlist with his previous reign beginning with an Upset of the Year first round knockout over Jorge Linares for the WBA title in 2009 and ending in his first defense via TKO 12 loss to Takashi Uchiyama. Salgado began his second reign with a unanimous decision over Argenis Mendez for the vacant IBF title last September. Three months later, Salgado and Miguel Beltran Jr. fought to a two-round no contest when Salgado suffered a cut over his left eye from an accidental clash of heads.

Honorio, also from Mexico City, has been a pro for thirteen years and is regarded as a well-traveled veteran on the downside of his career. The 32-year-old has scored career victories over Cristobal Cruz, Steve Luevano, Rogers Mtagwa, Frankie Archuleta, and John Molina while coming up short against the likes of Robert Guerrero, Argenis Mendez, and Luis Cruz. In his last fight, Honorio won a split decision over Thailand’s Fahsai Sakkreerin in an IBF super featherweight title eliminator.