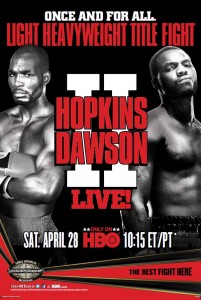 Bad Beats Back the Execution: Dawson gets the win he has sought for years

Chad Dawson relieved himself of a burden on his back that he had carried for several years tonight when he defeated the future hall of famer, Bernard Hopkins in clear and convincing fashion.  It was far from entertaining, but it was the win that Dawson needed to move forward with his career.

Dawson did so in front of a large and vocal partisan crowd.  While he had some support, the majority of the 7,000 plus at Boardwalk Hall in Atlantic City came to see the Philadelphia native, Bernard Hopkins for possibly the last time.

Dawson believed that Bernard Hopkins avoided fighting him for over three years.  He believed that Hopkins only finally fought him last year because he was backed into a corner when contracts demanded he fight Dawson after the Pascal fight.  Dawson then believed that Hopkins faked an injury in the first fight because he was looking to get out of the contest.  So, the fighter from New Haven, Connecticut came in tonight to finish what he felt had started years before.

The fight started as slow as possible in the first two rounds, even for two fighters considered more on the technical side.  In round three, Dawson began setting the game plan that would control the fight.  Hopkins circled and Dawson pressed.  When Dawson got within range, he used his long jab to start a three or four punch combination that may not have landed much leather, but allowed him to win rounds on activity.  It was a pattern he used throughout the fight.

Hopkins began to make attempts to assert himself in round four.  His characteristic straight right and lunge forward found the mark a few times.  More importantly, a head-butt from Hopkins opened a cut over Dawson’s left eye that had everyone concerned this one would end prematurely like the last fight.  The cut was patched well though and never factored into the outcome.

In round five, with the cut on his mind, Dawson seemed to get some urgency and began being more aggressive.  He followed the same plan as stated above but did so with more speed and more willingness to take risks to attack.

The second half of the fight followed a similar pattern.  At times, Hopkins would have mild success with the straight right, but the majority of the fight was controlled by Dawson.  He was simply younger, faster, taller, more aggressive, and the better fighter at this point of his career.  Hopkins seemed to finally succumb to age and an opponent able to use his youth to overcome the ageless wonder’s ring intelligence.  As the rounds went by, more of Dawson’s punches seemed to find the mark although Hopkins was never hurt at any time.

Hopkins made a last effort in round twelve, pressing harder than at any point in the fight.  But it was far too little too late for “The Executioner.”  “Bad” Chad Dawson had already done plenty to pull ahead.  Judge Steve Weisfeld and Richard Flaherty had it 117-111 for Dawson while somehow judge Luis Rivera saw it 114-114.  The Boxing Tribune had it 117-111 as well.

Dawson 31-1 (17 KO) takes home the WBC and Ring Light Heavyweight titles and gets past a hurdle he had to accomplish to move forward.  Afterwards he stated he would like to take on Andre Ward for his next bout.

For Hopkins 52-6-2 (32 KO), he may have showed his age, but he has had a career of incredible performances that is guaranteed to make him a first ballot hall of famer.  He was soundly congratulated by the many fans that came to see the legend as he exited the ring for possibly the last time.

Afterwards at the post-fight press conference the two heated rivals quickly became civil competitors with each other.  Hopkins congratulated Dawson, spoke highly of his abilities, and said he expects him to do well in the future with his career and his family.

Hopkins of course was asked if he would retire and stated “We’ll see what it is.  Right now I feel good.  I’m forty seven, my shoulder, my other shoulder is aching and I’m a rest up and take care of myself.  Right now I can’t tell you either or.”

Dawson hopped in while Hopkins was speaking to pay the respect that was appropriate to someone who has accomplished what Hopkins did in his career.

“Hey man, you’re a legend.  It was a hell of a fight and you’re definitely a legend in my book.”

Seth Mitchell has been on HBO twice now and has boxed less than five rounds.  In his first appearance, he scored a second round knockout of Timur Ibragimov.  Tonight, he needed three rounds to stop Chazz Witherspoon  and pick up the NABO title in the process.

Witherspoon appeared to be ready to pull the upset with a solid first round.  He began the round circling and boxing at a distance.  Midway through the round he began an aggressive long range attack that rocked Mitchell several times with hard overhand rights.

Mitchell showed resolve when he came out to change the momentum in round two, which he did by being aggressive and landing some heavy body shots.  Then, in round three, Witherspoon  made the mistake of mixing it up inside with Mitchell and paid a heavy price.  The two were trading in close when Mitchell landed a right hand followed by a flush left hook that sent Witherspoon to the ground.

Chazz beat the count, but had little left in his legs.  Without movement, Witherspoon was a sitting duck for the aggressive Mitchell who seemed destined to have an early night.  Mitchell closed the show, landing two huge right hands.  The second one sent Witherspoon into the ropes, but referee Randi Neumann began counting.ruling it a knockdown as Witherspoon was saved by the ropes.  Quickly into the count Neumann decided Witherspoon 30-3 (22 KO) had nothing left and called a halt to the bout at 2:31 of round three.

The college football star turned boxer continues to impress every time out and has shown he is a true contender as opposed to just another football player looking to play in the ring.  Mitchell 25-0-1 (19 KO) is gaining momentum and, judging from the loud support he had in Boardwalk Hall tonight, has plenty of fans. Assuming he continues being impressive in the ring, bigger and better things should not be far away.

Shawn Porter remained undefeated, stopping Patrick Thomson in the sixth of a scheduled eight round welterweight bout.  For extended periods of the fight Porter seemed content to dance around the ring throwing flurries and racking up points.  He was clearly winning the fight but had the opportunity to be impressive on the big stage with an opponent in front of him that was well below his league.

In round six, Porter did just that when he stepped on the gas.  He and Thompson began getting into exchanges and Porter was getting the best of the action.  Thompson 18-18 (8 KO) got hurt by several hard left uppercuts and hooks and referee David Fields stepped in to stop the action at 1:39 of round six.

Porter goes to 19-0 (14 KO).  It seems that it would be about time to step him up to a higher level of competition and find out if he is capable of bigger and better things.  Porter talked with the Boxing Tribune after his fight.

“Definitely going to go back and take a look at it.  I was sharp.  There was a point where I got in a little too close.  Overall a pretty clean performance, landing a lot of what I wanted and just showcased my skills.”

Porter talked about turning it up in the sixth round and deciding it was time to go for the finish.

“We were seeing it.  My punches got faster.  He got slower.  My corner said it was only a matter of time before that big hook landed.

Phil Lo Greco and Hector Orozco to started the action in Atlantic City.  Considering Lo Greco is undefeated and Orozco has twice as many losses as wins, it was a surprise when Orozco scored a flash knockdown in the opening seconds.  Lo Greco came back strong to dominate the rest of the six round welterweight bout gaining a unanimous decision by scores of 59-54 and 58-55 twice.  Lo Greco stays unbeaten 23-0 (12 KO) while Orozco falls to 5-11.

Local Philadelphia fighter Julian Williams is in the ring with Hector Rosario.  A good portion of the small crowd that has gotten into the building early is here for Williams and making some noise.  Williams started strong landing plenty of strong one-two combinations.

Williams looked strong on offense and defense as he won a unanimous decision by scores of  79-73 twice and 78-74 in the eight round junior middleweight bout.  Williams moved backwards and around the ring most of the fight as Rosario pursued, but once they engaged Williams 9-0-1 (4 KO) had little trouble landing hard right hands and quick left hooks while slipping Rosario’s 7-2-2 (5 KO) wider punches.

I talked to Williams afterwards and he stated “I wanted to pace myself. It was my first eight rounder and I didn’t want to get crazy.”  Williams discussed that he moved a lot in this fight due to Rosario having a solid punch and believes this fight and his last fight, which was a tough outing with Erberto Medina gave him good learning experiences and show he is ready for the next level.

“I got a solid chin, I’m from Philadelphia and we gonna fight so that’s how it goes.”

Lavarn Harvell 10-0 (1 KO) provided the first knockout of the night with a vicious one punch left hook that sent Tony Pietrantonio 7-9 (6 KO) to his back.  The fight was waived off immediately and  medical personnel were brought to the  ring to attend to Pietrantonio, who did rise and leave on his own.  The official end was at 31 seconds of round three.  The bout was fought at light heavyweight and was scheduled for  4 rounds.  The Atlantic City product Harvell was fighting at home and had his share of supporters in the audience.

Mike Faragon 17-0 (8 KO) rolled to a decisive but competitive unanimous decision over Sergio Rivera 16-9-2 (10 KO) in an eight rounds lightweight bout. The fight was exciting as both men were willing to stand and trade, but the more talented Faragon got the better of it during the in close exchanges.  Faragon won by scores of 78-74 and 79-73 twice.