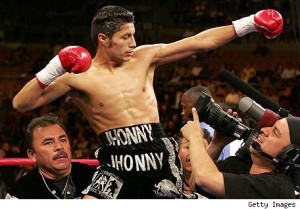 Making the fourth defense of the belt he took from Hozumi Hasegawa in 2011, Gonzalez pressed the attack and scored points early on pure, effective aggression.

Rojas, who was forced to vacate his WBC title in 2010 due to a hand injury, used movement and looked sharp while trying to time and counter Gonzalez. However, the native of the Dominican Republic, was dropping early rounds in the process.

In the sixth round, Rojas’ plan seemed to be coming together as he began scoring some hard counters on his opponent and the scorecards began to even up.

But Gonzalez kept pushing forward, throwing heavy combinations and making them count when they touched the elusive Rojas. In the tenth, a Gonzalez hook to the liver forced Rojas to take a knee. The shot, which produced a delayed reaction knockdown, also ended Rojas’ mid-rounds rally and allowed Gonzalez to take the comfortable decision on all three scorecards. For the record, The Boxing Tribune scored the contest, 117-111, also for Gonzalez.

Salgado, who began the contest looking infinitely sharper than his opponent, dropped Honrio in the third, but was slowed down the following round after suffering a deep cut over his left eye.

By the sixth round, Salgado’s cut was bleeding profusely and allowing for Honorio to even up the contest.

With the decision still in doubt, the younger Salgado stepped on the gas and took the closing rounds to seal the deal in his favor.