It’s tough not being a big shot boxing scribe. I don’t have the luxury of preening on Twitter all day while fluffing up my ego and pretending to be a celebrity.

No, I’m just a bomb-throwing, blue-collar boxing writer who plugs away and dirties his hands with little things such as critical thinking and common sense– two characteristics that are not very well received in the world of boxing media group-think.

As such, a lot of what I write has fallen on deaf ears within the “industry.” Oh, the fans get it– and that’s the reason The Boxing Tribune has grown from a one-man, part-time blog to the fastest growing boxing website on the net. 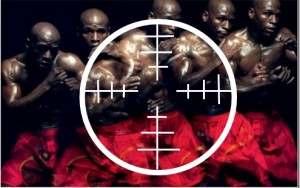 And, now, a lot of what I explored years ago is starting to be picked up by the big shots. Most recently, the theme of Mayweather as a media target has been booted around and analyzed.

I’ve plowed the fields of this topic exhaustively and have moved on. But with various media outlets starting to focus on this, I figured I’d open the vault and once again explore the fighter’s hate-hate relationship with the mainstream boxing media.

The media heat on Mayweather started before he got sentenced for domestic violence and long before he made the insane claims of superiority over fighters like Robinson and Ali. The real heat could actually be traced back to the moment he officially split from Top Rank and Bob Arum.

Here’s a little secret that may not actually be much of a secret. Most sportswriters are frustrated athletes or schlumpy stats nerds. The best way to get a raw deal as an athlete is to tell them that they are ignorant and worthless, even if most of them are, indeed, ignorant and worthless.

Throw in the fact that many of these worthless and ignorant boxing scribes are also blatant shills or aspiring shills, and you have the perfect recipe for a virtual beatdown.

The birth of the “Money” persona and the blatant disrespecting of media-types came after the daily lynchings Mayweather received upon leaving Top Rank. The opening salvo in this quasi-war came from the media. And Mayweather, whether he secretly felt this way all along or not, didn’t become public with his media disdain until he was already a major target.

No fighter in recent memory was ever painted into the types of corners that Mayweather was. No matter who he fought, there was an outrage about him not fighting the other guy. And when he fought the other guy, there was always something else to hit him with. Even when he retired, the media was aggressively unfair and burned for him to return for some more target practice.

I’m not an advocate of softball interviews, but nobody gets grilled the way Mayweather has. And, believe me, just about every major fighter could be fricasseed for personal matchmaking decisions.

The media may be a lot of things, but they aren’t completely clueless about the way things happen (well, maybe Dennis “D’Source” Guillermo is). They know just as well as anybody that Top Rank chief, Bob Arum was blocking some of the major divisional fights for Mayweather. Sure, Mayweather’s indifference and arrogance also made sure those fights would never happen, but even a warm and fuzzy “Pretty Boy” was not going to get anywhere against the jilted ire of Arum.

The litmus test for a smart fan is always the Margarito-Mayweather debacle.

For those unfamiliar with the tale, shortly after Mayweather split with Top Rank, Bob Arum made a public offer for Floyd to fight WBO welterweight titlist, Antonio Margarito for a supposedly guaranteed $8 million purse.

On the surface, this seemed like a legitimate “my guy vs. you” grudge match offer. But did anyone really expect Mayweather, who had just gone through a nasty split with Top Rank and had legal actions pending with the company, to turn around in his very next bout and fight under the Top Rank banner? Really. You’d have to dine regularly on paint chips for that to start to make sense.

Forget the alleged 8 million that Bob Arum was “offering”. He could’ve said 100 million. This fight just wasn’t going to happen and, really, couldn’t have happened. Arum knew that and used Mayweather for cheap publicity to pump up his fighter… and the media, not surprisingly, bought into it.

Margarito, as a result, went from a mostly inactive fringe champion to “The most feared man on the planet” and was promoted as such by a band of fawning, mostly metro-sexual West Coast boxing scribes.

Mayweather, on the other hand, became fair game.

Two months after the Puerto Rican star left the Top Rank stable of fighters, Team Mayweather came calling and the fight was signed. Cotto, by the way, was one of the favorite fighters the media pointed to as proof of Mayweather’s implied cowardice.

Anyway,over the next six years, Mayweather was dragged through the cyber streets of the Universo Pugilistico with little attention paid to actual facts. Apparently, Mayweather was the only fighter to ever take money fights when he got to the top of his profession. He also, apparently, was the first person to ever let boxing politics get in the way of his ring schedule. I guess he also debuted the concept of favorable matchmaking.

And, putting aside the double standard imposed on him by the media, he was also the subject of pretty unethical journalistic standards– blatant rumor-mongering, at best, and downright lying, at worst. Boxing’s mainstream media routinely floated rumors out into the public, none favorable to Mayweather and all of them conveniently timed to run when either Mayweather was fighting or when a perceived nemesis of Mayweather’s was gearing up for a fight. These “journalists” would even run with hit pieces where the only source was Mayweather’s heated rival, Bob Arum.

It got to the point where any smart fan, even if they detested Mayweather, had heard enough. And, again, this was before Mayweather had really invested himself into the bad guy role.

Really, though, under those circumstances, who wouldn’t lash out or, at the very least, turn himself inward?

Whether Mayweather is a good guy or an asshole matters little to me and it shouldn’t matter, either, to anyone interested in the truth. I’m not interested in becoming his BFF or in crucifying him, either. Whether Mayweather is arrogantly delusional in terms of his place in boxing history should mean little to a real professional. The media guys used Mayweather as their fall guy, as the guy against whom they could pretend to be responsible and aggressive journalists.

After all, Mayweather was a safe target. His crew wasn’t known for wining and dining boxing media figures and, unlike most boxing management, they had invested no time into stroking the egos of guys who, really, just want to be celebrities in their own little ringside world.

On the contrary, Team Mayweather, made it known that they were the stars, not the media– a definite no-no to the bloated egos at press row, even if it’s 100% true. So, the guilty parties in the media ditched any semblance of professionalism and went on the offensive.

Mayweather’s response was to simply shut them out and pump up the volume of the sycophants around him. Sycophants, by the way, who have contributed to his deluded sense of self-importance.

And now the media is butt-hurt and wondering what happened? Really?

Those who have recently explored this Mayweather vs. the media  issue have come to the predictable conclusion that Mayweather deserved his cyber lynchings or, more ridiculously, that Mayweather should be thankful for the abuse as a source of inspiration and motivation.

At the end of the day, though, most of the mainstream boxing media was aggressively dishonest towards Mayweather and they employed a disgustingly blatant double standard.

This is not my defense of the man. Rather, it’s a defense of the alleged role of a journalist as someone who strives to deliver the truth to his readers.

If a dedicated bomb-throwing outsider can see this, why are the big-shots so clueless?

You can email Paul at paulmagno@theboxingtribune.com or catch him as he tries to talk readers into taking pictures with him at ringside. Paul is a full member of the Burger King Kids’ Club, a born iconoclast, and an ordained minister in the Universal Life Church.