Fight fans in the Ukrainian Donbass Arena were treated to an unexpected upset this Sunday as Paul Malignaggi (31-4, 7 KOs) defeated their home town hero, Vyacheslav Senchenko (32-1, 21 KOs), via TKO 9, relieving him of the WBA World welterweight title many felt was held hostage in Europe for the past three years. 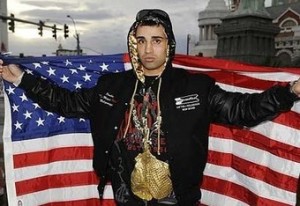 The bout was a mostly jab-centric affair, with the edge obviously going with the much quicker Magic Man, who began to find a home for his clean, popping right hand jab early in the first round.

It became quite evident from the opening moments that the formerly undefeated Senchenko had never fought on the level of the Magic Man (who has shared the ring across with plenty of notable talent). Also obvious was Senchenko’s inability to avoid or even deflect the incoming jabs from the ‘Future Legend,’ Paulie Malignaggi.

Senchenko’s defense was so bad, his footwork so plodding and slow that the casual fight fan would wonder what the true caliber of his previous opposition (Subway sandwich artists?) was. It’s no wonder that in the ten years Vyacheslav Senchenko has been a prize fighter he hasn’t strayed far from the comforting embrace of the Ukranian judges (Senchenko has fought 33 professional fights and all but 3 were fought inside of the Ukraine).

The now two-time champion was undoubtedly en route to a landslide points decision (barring no controversy from the judges) when the fight was stopped by ringside doctors acting on the advice of American referee, Double S – Steve Smoger. Senchenko’s left eye was completely swollen shut by the ninth round and this was possibly a direct result of the Ukrainian’s team not administering the end-swell until late in the bout.

Malignaggi enjoyed success with his high output style, as evidenced by his connect statistics. Paulie landed with 50 more total punches throughout the bout, and out jabbed the Ukrainian punching bag at an impressive 468 attempted to 315; Malignaggi landed nearly 40% of his power punches, more than 20 higher than his dismissed adversary.