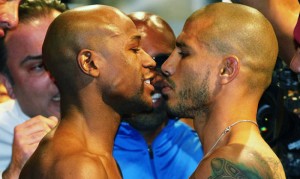 The veteran trainer, most famous for discovering Antonio Margarito’s doctored knuckle pads prior to the 2009 Mosley-Margarito bout, noticed an irregularity in the gloves being used by Saul Alvarez.

The fuss drew the attention of Team Cotto, who then demanded that Floyd Mayweather, who was wearing the same 10 oz. gloves as Alvarez, be subject to another revision.

Here is the report from Lance Pugmire of the Los Angeles Times:

Mosley trainer Naazim Richardson spotted a flaw in the 10-ounce black and yellow Grant gloves Alvarez planned to use in Saturday’s fight.

Since Mayweather was to also use the same version of the glove, Cotto’s attorney Gaby Penagaricano objected, too.

The Nevada State Athletic Commission ruled the gloves unapproved for both Mayweather and Alvarez because the thumb is covered in patent leather, not genuine leather, and because a hard seam at the top of the thumb protrudes and could ultimately cut an opponent.

A new all-genuine leather version of the gloves were to be flown to Las Vegas from New York Saturday morning, said Tony Lato, the chief inspector for Nevada.

“This ain’t amateur boxing,” Richardson said. “This is high stakes. To beat my guy, you better be the better guy, not winning by this horse [expletive].

Mayweather cornerman, Rafael Garcia informed Pugmire that Mayweather had used similar gloves for his May, 2010 win over Shane Mosley.

The fact that a trainer can spot these irregularities when state commission inspectors can’t speaks volumes as to the level of supervision for these fights. The Nevada Commission is regarded by many as the best in the nation.