Saturday from the Newtown Athletic Club in Newtown, PA, about forty minutes outside of Philadelphia, young promoter Brittany Rogers moves forward with her second show.  Rogers became the youngest female promoter in America to promote a card when her company BAM Boxing Promotions hosted their first show last September. 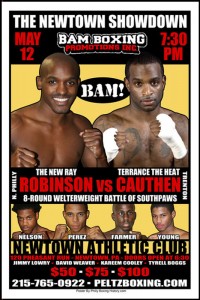 Rogers got her start as an intern at Philadelphia’s legendary fight center the Blue Horizon and then served as an intern to Hall of Fame Promoter Russell Peltz.  The young company had hoped to have something early this year, but several fighters dropping off the card forced a cancellation so BAM returns this Friday for the second installment.

The headliner features “The New” Ray Robinson (13-2, 5 KOs) taking on Terrance Cauthen (36-7, 9 KOs) in a ten round welterweight bout for the PA State Title.  The fight pits two southpaws, who both have strong technical skills, against each other.   Robinson is the younger and more naturally gifted fighter while Cauthen brings an advantage in experience.

The Philadelphia fighter Robinson started off his career with eleven wins including twice defeating undefeated fighters.  Robinson took on fellow undefeated prospect Brad Solomon in December of 2009 and lost a majority decision.  Robinson then stepped into another tough bout with highly touted undefeated prospect Shawn Porter in his next fight.  Robinson dropped a unanimous decision to Porter on Shobox.

Robinson was off for thirteen months following the Porter fight but has gotten active again recently.  After signing with BAM Promotions, Robinson returned to stop veteran tough guy Manuel Guzman in the seventh round on the opening BAM show last September.  Robinson then won  a unanimous decision over another veteran heavy hitter, Doel Caraquillo, on the undercard of the first NBC Sports Fight Night card in January of this year.

Cauthen is from Trenton, NJ and, with forty three fights under his belt, will represent the most experienced opponent of Robinson’s young career.  Cauthen has losses to several top names including Paul Williams, Antonin Decarie, Shamone Alvarez, and Sechew Powell.

The action starts at 7:30pm from the Newtown Athletic club and features seven bouts.  The card will also be broadcast on internet PPV with Go Fight Live at www.gfl.tv for $9.99.