Uzbekistan-born European cruiserweight champion, Alexander Alekseev (23 – 2 – 0 with 20 KOs), will be in action this Friday against mandated challenger and former WBA champion, Firat Arslan. 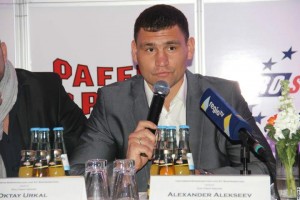 Alekseev, now fighting out of Germany, is on a 4 fight winning run since being starched in 2 by Denis Lebedev back in 2010 and is defending the belt he picked up in his last outing , against Enad Licina back in February.

German native Arslan (32-5-1, 21 KOs) is riding a 3 fight streak since suffering back to back losses first against Guillermo Jones, the current WBA king to whom Arslan surrendered the full belt in 2008 and then against Steve Herelius, against whom the German retired in the 11th in an interim title fight 2 years later.

Both fighters have top 15 rankings with all 4 major sanctioning bodies with Alekseev having the highest ranking at number 3 courtesy of the WBO and the organisations Intercontinental trinket will also be at stake putting the winner in good position to make a case for challenging current champion, Marco Huck.

Alekseev may even be looking to score revenge against Lebedev who is the WBO’s #1 contender if he gets by Arslan this week. Huck may be looking to return to the Heavyweight division having tested the waters above 200lbs with a narrow loss against Alexander Povetkin in February or look to clear up matters with interim champion, Ola Afolabi who pushed the champ to a ding-dong majority draw last Saturday.

At 41 years old and with 5 reversals on his record this may be Arslan’s last run at regaining former glory and Alekseev starts a clear favourite considering his freshness, he has 10 years on his veteran foe, a decent height advantage and his impressive KO stats.