Frank Warren and the British Boxing Board of Control are at loggerheads tonight over Warren’s plans to defy the UK’s governing body and forge ahead with a July 14th fight between heavyweights David Haye and Dereck Chisora. 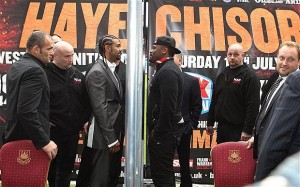 Warren has attracted widespread criticism for putting his promotion together after the Board had withdrawn Chisora’s licence, and to all intents and purposes confirmed that Haye’s licence would not be re-issued should he apply for it, after the two boxers clashed at the press conference after Chisora’s abortive assault on Vitali Klitschko’s world title back in February.

In the immediate aftermath of the fracas, Warren condemned the two combatants and made it clear that he’d have nothing to do with putting on a fight between them, but barely three months later the lure of the big bucks has Frank setting aside his principles and facing down the sport’s regulatory body. No-one familiar with Frank Warren’s tenuous grip on decency and integrity is the least bit surprised. Warren’s spurious argument that he’s acted to protect his fighter’s livelihood is utter nonsense, and he knows it. Adopting Warren’s logic, if one of his employees shot him in the chest (ring any bells?) they would be entitled to walk free because imprisonment would compromise their income (an argument that only holds water in Las Vegas – apparently).

Warren thinks he’s been clever in circumventing the Board’s authority by drafting in the Luxembourg Boxing Federation, who have agreed to issue the two fighters a license, and have the bout take place under their jurisdiction, which is permitted under EU law and even allows them to trample all over the Board’s jurisdiction and hold the promotion on British soil.

The British Board have reacted in the only way they can. Robert Smith, their General Secretary, issued the following statement:

“The Articles of Association…of the British Boxing Board of Control, to which every member has agreed to be bound, make it perfectly clear that the object of the BBBoC is to control and regulate boxing in the United Kingdom.

“Any member of the BBBoC who participates in any way in a promotion such as that referred to above would thereby evince an intention not to be bound by the Constitution of the BBBoC and would act in a manner wholly incompatible therewith.

“In such circumstances the BBBoC would accept that member’s repudiation of the Constitution as terminating his/her membership of the BBBoC and his/her licence.”

So, the battle-lines are drawn and it will be interesting to see how this plays out over the coming days. Doubtless, Warren and his partners will have anticipated the Board would react as they have, as it is the only response they could have given, and his next move will have probably been pre-designed.

It seems the British public are divided on the issue, but only because fight fans desperately want to see these two fight in the ring. Those of us who have any thought for the integrity of our sport in the UK (and you can number this scribe among them) are firmly behind the Board, wishing to protect the long-term well-being of Boxing, in preference to the short-term gratification of seeing the two thugs, who have both fallen short at the top level of the sport, batter each other around the ring.

Neither fighter apologised for their actions in Germany at the press conference to announce the fight at Upton Park yesterday, and instead we were treated to a foretaste of the kind of unseemly PR spectacle that awaits over the coming weeks, when the two were invited to hurl insults at each other through a wire fence.

Warren, Haye, Chisora, Adam Booth, and the Luxembourg outfit should be ashamed of themselves.