You say homebrewed, I say corrupt.

Reflecting on the one boxing match I did get to see this weekend, the European Cruiserweight championship between defending champion Aleksander Alekseev and German-Turk challenger Firat Arslan, it occurred to me that rather than describe the fight itself, which didn’t really set any records for excitement (paling into insignificance when compared to the cruiserweight contest earlier in the month which produced a 12th round that really ought to go into consideration for end of year honours), I should probably make comment on the fact that once again it appeared as though the more German of the two fighters did better out of the judges than they deserved. 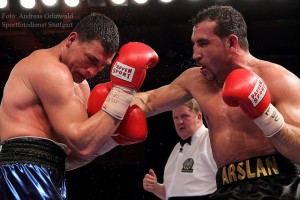 I had Friday’s contest for the European 200lb belt (with accompanying WBO intercontiwhatsit strap) for the defending champion by 3 rounds. While Arslan looked competitive on occasion, flattered by the sometimes lazy Alekseev, he was nowhere near close enough to wresting the title from the Russian born, but now German resident, titlist.

But being the ‘more’ German of the two he was awarded a draw and now remains relevant, for the time being. They might fight again. Neither of them can touch Huck or Afolabi (esp. given Huck fights as a German resident now also).

It’d be easy to sit and point the finger at German judges per se as being the worst for generating ‘homers,’ but I think that would be missing the point to some extent. It’s possible that Germany gets a bad rep based on volume because, outside of the UK, it’s probably the busiest European venue for pro boxing, playing home to not only its native fighters, but also a whole host of former Soviet bloc nations all looking for greater exposure and, ultimately, opportunities to see the bright lights of Vegas.

The biggest beneficiary out of recent German homers has been the ‘great’ Felix Sturm, who has sat pretty at home (venturing out just once to Croatia) in the years since suffering a bad’un against Oscar De La Hoya in Las Vegas. One could argue that having suffered a steal to the Golden Boy in Vegas, he has been well within his rights to leash himself to the yard post and make his challengers come to him.

But when we dig a little deeper we find ‘odd’ decisions that don’t strictly tally with the theory of hometown favoritism. While Matt Macklin was surely taken to the cleaners by Sturm’s friendly panel in their bout in June last year, Macklin’s fellow Brit, Martin Murray did considerably better in Sturm’s next outing 6 months later, earning a draw despite the fact that I scored a win for Sturm.

Similarly, Huck wasn’t given the nod in his foray into the Heavyweights against Alexander Povetkin. When on home soil and with a rousing performance, one might have expected to have seen him cause an upset.

So, if it’s not purely based on nationality, what on Earth is going on here? It’s been suggested that judges based there decisions in part on favouring the fighter who is the promoter’s draw since it is the promoter who is making the fight and generating the revenue. Out of the revenue comes the wages. There is certainly some degree of correlation between the ‘name’ fighter being the champion and fighting at home, but the idea that a supposedly independent judge is influenced by the fact that if they annoy a promoter or TV network boss, or sanctioning body by returning a decision which doesn’t fit the ‘story’ then they might not find themselves as gainfully employed in the future simply does not sit right with this writer.

I’ve crossed tweets with some fairly well established ‘experts’ on UK boxing and have been told pointedly that corruption does not exist in boxing. Well I call that ‘bunk’. Whether you hand a guy an envelope full of money with instructions or simply let him or her know that not following the script will result in dropping down the pecking order with the consequential reduction in earnings and benefits, then it amounts to the same thing. When two gladiators step into the ring, both should expect to do so with the result unknown beforehand and only to be decided using a combination of their skill, hard work and heart.

Whatever external forces operate to reduce that strand of purity in the sport, they must be called out.
We can take a leaf out of ‘Twitter King’ and new Welterweight belt holder Paul ‘Magic Man’ Malignaggi who took to his favourite speaking box when he learned that one of the judges scoring his recent and complete domination of then- champion Senchenko had the Ukranian ahead on points by the time the stoppage came. “Jean Louise Legland should be banned from judging another fight in his life. #Corruptjudge #tk”