It’s difficult not to get drawn into the hype that surrounds Englishman David Price, the UK’s latest heavyweight hope. On Saturday night at Liverpool’s Olympia, local boy Price gets his chance at the vacant British title when he takes on Norwich’s Sam Sexton. 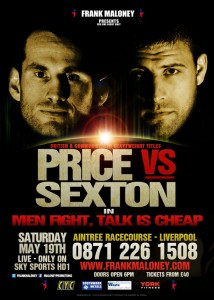 Price, 28, is the next big thing, and follows a couple of years in which British heavyweights have been crawling out of the woodwork. David Haye flattered to deceive, Dereck Chisora achieved a certain kind of notoriety, and Tyson Fury continues to impress and intrigue.

Beside these three mavericks Price represents the establishment – a bronze medalist in Beijing, and captain of the English team, Price has done things by the book both as an amateur and professional. He’s compiled an impressive 12-0 record, with 10 wins inside distance, and has looked mightily good doing so. In his last two fights Price accepted his biggest challenges with aplomb – knocking out fellow prospect Tom Dallas in two rounds, and then dispatching the not untalented John McDermott in just over a minute.

Saturday’s opponent Sam Sexton represents another step up and forward for Price. Sexton, 15-2, 6 KO’s, has only lost to Chisora (twice), once while challenging for this title, and is a former Commonwealth champion in his own right. He’s a tough and relentless campaigner who carries a dig and won’t roll over easily.

Price, of course, has all the physical advantages. At 6 feet 8 inches he would tower over a Klitschko, and he’ll take around a twenty pound advantage into the ring with Sexton. He is favoured to win, but there’s a hidden constituency that aren’t yet buying into the hype. As an amateur Price at times demonstrated a brittle chin, and that part of his game has yet to be tested in the pro ranks, along with his stamina and willingness to go into the trenches in a long, hard fight. Sexton could be the man to put those qualities to the test, and after this contest we’ll have a much more accurate idea of Price’s world title credentials.

On the undercard, British light-welterweight champion Ashley Theophane defends against Darren Hamilton. Hamilton, 11-2, 3 KO’s came to boxing late, and at 33 will find things tough against the up-and-coming Theophane, 31-4, 9 KO’s, who’s on a six fight winning streak, and looking better with every outing. The well-travelled British champion should win this one handily, and begin looking towards European honours.