It’s not a major heavyweight bout, but Franklin Lawrence vs. Mike Mollo this Friday at the Dover Downs Hotel & Casino in Dover, Delaware is one of those second (or third) tier bouts that sets up bigger thing and, because of that, could be an interesting affair. 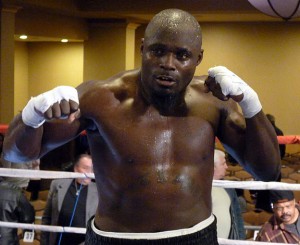 Lawrence (17-2-2, 12 KOs) is on a five-fight win streak since losing a ten round decision to Oliver McCall in 2009. Included in that run of victories are decent names such as Lance Whitaker and Jason Estrada, so there is some reason for the Indianapolis native to boast a modest club-level buzz. As a matter of fact, some already have the 36-year-old on the fringes of the American heavyweight top 10.

Chicago’s Mollo (20-3-1, 12 KOs) has never really scored a major victory, unless one considers a TKO 2 win over Kevin McBride in 2006 as major. The heavyweight battler is best known for an entertaining back and forth 2008 battle with Andrew Golota that wound up as a unanimous decision loss. This will be Mollo’s first fight since August of 2010, when he fought to a draw with Gary Gomez.

The Lawrence-Mollo card will be televised Friday night on www.gfl.tv, starting at 7:30 PM for a charge of $9.99.