Junior middleweight contender, Alfredo Angulo (20-2, 17 KOs), recently gave an interview to ESPN’s Spanish-language boxing show, “A Los Golpes” and talked about the current status of his career, revealing that the last six month stretch of his life has been a truly hellish experience. 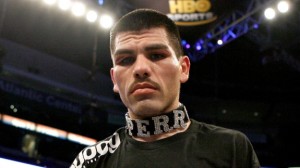 Angulo, a native of Mexicali, Mexico, who has had all but four of his fights in the United States, revealed that he has been incarcerated in an immigration detention center in El Centro, California for the last four months, looking to resolve previous immigration issues.

During the interview, the fighter also revealed that two weeks prior to his November TKO 6 loss to James Kirkland in Cancun, his nephew had been kidnapped.

“Two weeks before that fight, my sister’s son was kidnapped in Mexicali and I think I wasn’t 100% focused [on the fight]. My body was there, but my mind was somewhere else,” Angulo said.

Two months after the career-derailing Kirkland loss, Angulo was advised by attorneys to return to the U.S. and turn himself in to authorities to resolve his immigration issues.

Since then, Angulo has been waiting for his day in court, suffering through several postponements, and hoping to clear his name to resume his career in the United States.

“My next hearing was supposed to be this month. They put it off until June and that makes me sad,” Angulo told ESPN Deportes. “A boxer’s life is very short and the fact that they have me here, doing nothing and not being able to do my work, is criminal.”