Another major fight may have bitten the dust under the weight of true random blood testing and the Voluntary Anti-Doping Association (VADA) protocol.

Andre Berto, who is working with infamous doping expert, Victor Conte, has tested positive for a banned substance with just about a month before his scheduled rematch with Victor Ortiz on June 23. 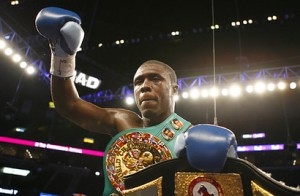 Victor Conte, who has dealt in illegal supplements in the past, has taken his case to Twitter, speculating that the positive test result could be as a result of a contaminated supplement Berto had used on his own.

“Andre has admitted that he was using additional supplements that were not provided to him by me,” Conte wrote. “I have recently warned several elite boxers about taking supplements I believe are not effective & possibly contaminated. Not all listen…I encourage my fighters to do VADA testing & will continue to do so.”