Parken, Copenhagen, Denmark – Mikkel Kessler (45-2, 34KOs,) closed the show early, stopping the visiting Allan Green (31-4, 21KOs) with a brutal left-hook at the 17 second mark of round number 4. In the process, he took the WBC’s light heavyweight ‘silver’ title. 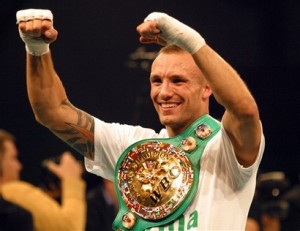 In somewhat of a crossroads fight, Dane, Kessler sought to reclaim his “Viking Warrior” status among his rabid fans by taking the scalp of Super-Six co-competitor Allan “Ghost Dog” Green. Marking almost two years since Kessler had his wonderfully grueling back and forth battle with Nottingham’s Carl Froch, the Copenhagen native put on a convincing performance in front of hordes of his loyal Danish followers.

The 32-year-old Tulsa, Oklahoma resident looked noticeably bigger than did his Danish counterpart at the start of the contest, both men working at a safe distance with Kessler finding an early home for his stiff jab. The atmosphere was crackling as nearly every landed blow was met with deafening roars from the hometown crowd. Both fighters were a bit stationary in their approach, however, fighting a quite flat-footed first round until a massive right hand landed for the American fighter, stunned Kessler and left him open for a crunching body shot that sent him tumbling to the canvas, Kessler was given a standing 8 count and closed the round on his feet, firing a big combination to the head of Green in the closing moments.

When hostilities resumed in the second round, Mikkel Kessler began throwing with more urgency, firing jabs and trying to move inside of Green’s effective range. Perhaps sensing that he needed to be impressive after losing the first round, Kessler fought somewhat tentatively at first, but began slowly ratcheting up the volume of punches thrown towards the visiting challenger.

Matching each other jab for jab, the Viking Warrior managed to momentarily stagger Green with a surprise left hook to his unguarded jaw. “Ghost Dog” waved in the impending attack from the Scandinavian, absorbing a few hard punches for his trouble. Meanwhile, Kessler was continuing to search for a sweet spot for his leaping left hook to the head.

The third frame began with Green finding his way to the outside and attempting to control distance, but this was largely due to Kessler’s strategy to range and time the American. This, perhaps, was the winning formula for the Nord as a carbon copy left hook lands again on the flat-footed challenger’s mouth, setting up several powerful follow-up body blows. As round 3 came to a close, the momentum had definitely shifted in Kessler’s favor.

With only 17 seconds removed from the start of the fourth stanza, the Viking Warrior walks the jabbing Green into a picture perfect lead left hook, causing the head of the American to snap wildly to one side and sending him plummeting towards the canvas unconscious well before his body impacted the mat. This was only the second time that Allan Green was halted in a professional contest. Mikkel Kessler was awarded the WBC’s silver light heavyweight world title for his efforts.