Jesus Soto Karass (24-7-3, 16 KOs) returns to the ring this Saturday at the Casino Del Sol in Tucson, Arizona, looking to stop a downward trajectory of four straight losses. The 29-year-old veteran will be taking on Morocco’s Said El Harrak (10-1-1, 5 KOs) in ten round junior middleweight bout. 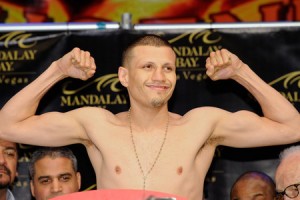 Soto Karass, known as a tough and frequent sparring partner on the Southern California scene, has lost his last four official bouts, dropping two decisions to Mike Jones, a technical decision to Alfonso Gomez, and TKO 5 loss to Gabriel Rosado in his last contest. During the 0-4 run, the Mexican national also registered a two round no contest against Gabriel Martinez. Over the course of an eleven year career, though, Soto Karass has scored some solid wins against the likes of Vince Phillips, Carson Jones, David Estrada, Chris Smith, and Germaine Sanders.

El Harrak, from Morocco by way of Henderson, Nevada, has a much lighter resume. Never fighting past the sixth round, El Harrak’s only noteworthy contest is a TKO 2 loss to Lanard Lane in 2009.

The card will be televised on Azteca America this Saturday, starting at 10PM Eastern.