Lucian Bute was the odd man out when Showtime announced their six-man tournament in 2009. Already arguably one of the better fighters in the super middleweight division, Bute, who had recently claimed the IBF super middleweight title, was left out in favor of young upstarts Andre Ward, Andre Dirrell, and division newcomer, Arthur Abraham. When Jermain Taylor was literally knocked out of the tournament, television contracts and politics again kept Bute (30-0, 24 KOs) out in favor of Allan Green, the lightly-regarded former super middleweight contender. 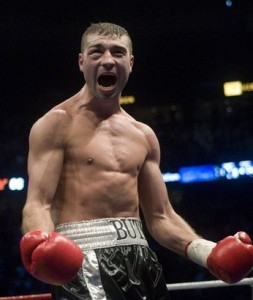 Bute patiently awaited the tournament’s end as he defended his title six times against the best opponents available in his adopted home nation of Canada. Librado Andrade, Edison Miranda, Jesse Brinkley, Brian Magee, and Jean Paul Mendy all failed to see the final bell against the Romania-born Bute. Former light heavyweight world champion, Glen Johnson, was the only out of the six to last the full scheduled twelve rounds. Bute established himself as a dominant force to be reckoned with above 160 pounds.

But despite the many successes of Lucian Bute, the knock on him was and is that he has feasted on hand-picked, IBF-approved opposition while the tournament’s contestants took the long, hard road. While Bute can point to his super star status in Canada, his successes on HBO and Showtime, and his undefeated record, his detractors can point to the aforementioned to knock him down a peg – and they have.

I’ve long maintained that Bute and his team made the smart choice to remain in the super middleweight division to wait for the winner rather than move up in search of new challenges. It makes all the sense in the world to stake his claim to being the division’s best before moving on. And as the tournament dragged on it became clear that the best super middleweight in the world was one of the least likely claimants to the title when the tournament started.

Andre Ward, the former Olympic Gold Medalist and current WBA and WBC super middleweight champion (the WBC’s decision to strip Ward notwithstanding), is widely regarded as the best super middleweight in the world, Bute would like nothing more than to prove his stake to the claim. Unfortunately he isn’t fighting Andre Ward on Saturday night; Carl Froch is the man standing in his way to staking his claim as the best. And Bute isn’t looking past Froch.

After Andre Ward won the two-year-long tournament the question arose as to whether or not he would fight Bute next. Bute made his intentions known, but Ward turned the tables on the eager Bute and suggested he fight Carl Froch, the tournament’s runner up. And after Showtime rejected the fight it was picked up by Epix HD, who will broadcast the fight live from the Nottingham Arena in Nottingham, Nottinghamshire, United Kingdom at 5 p.m. EST/3 p.m. PST.

In Carl Froch, Bute has an opponent that he can rightly call the best he’s faced in his career. Froch can take a punch just as well as he can throw them and has a penchant for drawing his opponents into his style of fight. Froch has also never been knocked out, and his two career losses came to Mikkel Kessler and Andre Ward, two of the top 5 168-pounders in the world. Froch paid his dues and taken chances when he went out on the road to fight. Now it’s Lucian Bute’s turn to leave the cozy confines of Quebec and his legions of adoring fans.

Lucian Bute may not be getting his shot to prove outright that he is the best super middleweight in the world, but Carl Froch is a great first step at improving his argument. If Bute passes Saturday night’s test with flying colors, he will have stamped out his first win behind enemy lines against an elite opponent at or near the top of his game.