Friday night from the Sands Casino in Bethlehem, PA, Main Events and NBC Sports will roll out the third installment of their Fight Night Series with two well-matched bouts that should produce viewer-friendly action.  In the main event, rising Jr. Middleweight Gabriel Rosado (19-5, 11 KO) takes on veteran contender Sechew Powell (26-4, 15 KO) in a twelve round bout for the vacant WBO Intercontinental title .  In the chief support, Bethlehem native Ronald Cruz (16-0, 12 KO) meets Prenice Brewer (16-1-1, 6 KO) in a twelve round welterweight bout for the vacant WBC Continental Americas Welterweight belt. 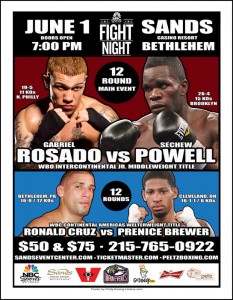 When NBC and Main Events decided to partner for the Fight Night series the goal was to showcase exciting fights instead of providing a showcase for specific fighters.  Only bouts that were well-matched, meaning they had a chance to produce fireworks in the ring and did not have an obvious outcome, would get the green light to appear on the program.

The Fight Night series was originally scheduled for four shows this year.  Then NBC expressed a desire to the show’s promoter, Main Events, to have Rosado back after his exciting performance on the first card.  The network decided to add an extra date to provide room for Rosado, resulting in this Friday’s card (for extensive details on the Fight Night card and added show this Friday see the Boxing Tribune’s interview with Main Events CEO Kathy Duva ).

With the go ahead to have an additional show Main Events went to their matchmaker, hall of fame promoter Russell Peltz, who promotes Rosado.  They teamed up for the Bethlehem card, which Peltz had begun planning even before it became an NBC Sports affair.  The first plan was to have Rosado matched against veteran knockout puncher Joel Julio, but Julio dropped out several weeks ago for various reasons.  Veteran Sechew Powell was quickly recruited to fill in.

Rosado has earned his way to headlining a TV date the hard way.  He began his career fighting anyone and everyone.  It resulted in a fighter who suffered five losses in his first nineteen fights.  It also resulted in a fighter who gained valuable experience that allowed him to become the dangerous fighter he is at this time.  In those nineteen fights, Rosado suffered losses to Alfredo Angulo and Fernando Guerrero while getting wins over Kassim Ouma and Latif Mundy.

Since his last defeat, Rosado is riding a five fight win streak, including his win over Jesus Soto-Karass on Fight Night, along with wins over Jamaal Davis and Ayi Bruce.  More importantly, Rosado has matured into a complete fighter that seems to have a true grip on his ring identity.  Rosado put together all his skills and experience in his best night when he became the first man to stop Soto-Karass.  He dominated the fight with speed, power, movement, and defense en route to forcing a stoppage in round five. He is making a name for himself as a dangerous fighter that can’t be ignored and is steadily making his way up the sanctioning body rankings to position himself for a title shot.

Sechew Powell presents a dangerous test for the high-flying Rosado as a skilled southpaw with plenty of experience at the top level.  Powell has fought some of the best at 154lbs including wins against Ishe Smith and Deandre Latimore (Powell previously lost to Latimore and then later won a rematch) along with a loss to Kassim Ouma.  Powell has lost his last two against  Cornelius Bundrage in June 2011 and Cory Spinks in January of this year.  Powell is probably past his best days, but anytime a crafty southpaw is picked as a late replacement the fighter on the other side of the ring should be careful.

In the co-main event Ronald Cruz will have the full support of an expected sellout crowd when the hometown hero looks to stay unbeaten and continue his march up the welterweight ranks.  Cruz had a short amateur career and then learned on the job as a pro.  He turned pro without much notice.  He began drawing attention when he upset undefeated prospect Jeremy Bryan two years ago with a sixth round knockout.

Since then, Cruz has been steamrolling better and better competition while improving as an all-around fighter.  He stopped veteran tough guys Doel Carrasquillo and Chris Fernandez.  He overcame a tough start to knockout veteran boxer Anges Adjaho last year.  In Cruz’s last bout he won a unanimous decision over Allen Conyers.

Cruz’s opponent, Brewer will present the best all-around boxer he has faced since taking out Jeremy Bryan.  Brewer has a long reach, speed, and good boxing skills.  His best wins came against unbeaten prospect Emmanuel Taylor in his last bout and over veteran Chris Fernandez.  Brewer’s lone loss came against Patrick Lopez in 2010 when he was stopped in the third round.

Each fighter in the two headlining bouts has a shot to position themselves to a future title shot with a win.  More importantly in the big picture, each fighter has the opportunity to be impressive on a big stage and show the networks and fans they are worth having back for future TV spots.  Main Events and NBC are looking to change the boxing landscape by bringing in more viewers with well-matched action fights.  Rosado, Powell, Cruz, and Brewer will be looking to use the platform to show they belong in those exciting fights in the near future.