PEDs busting is sexy. It’s the quickest road to a feel good moment in boxing journalism– It’s also one of the easiest and safest roads to travel. But one has to ask whether any of this recent rash of whistle blowing does anything other than inflate egos and produce better paying gigs for the journalists who engage in it. 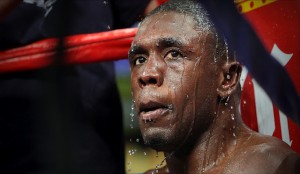 When it comes to the actual “outing” of the fighters, get in good with the “right” people and you’ll get the “scoop” a few hours before the results are press released to the public. Then, “Voila,” you have your Woodward and Bernstein moment without even breaking much of a sweat and, more importantly, without having to dig into any of boxing’s true and immensely dark underlying problems.

Sure, PEDs testing is an important issue in boxing and one that needs to be addressed. But independent testing, without the aid of some sort of legally-binding infrastructure is pointless. A little along the lines of swatting at flies on your stove, but leaving the 5 lb. sack of pig dung in your kitchen.

Journalistic grandstanding notwithstanding, the lack of due process in this rush to “break” PEDs stories is most troubling.

Lamont Peterson and Andre Berto, who recently tested positive for banned substances under testing administered by the Voluntary Anti-Doping Association (VADA), certainly deserved due process and the decency of a hearing before having their names plastered all over the cyberworld as vile drug cheats.

There have been cases of false positives in the testing world. There could also be cases where athletes are administered banned substances for reasons other than the enhancement of athletic performance. In the case of Berto, specifically, there has been a significant history of false positives for nandrolone.

Maybe both fighters are, indeed, vile drug cheats. They still deserve due process before being “outed.”

Most recently, a volunteer drug test, administered under the supervision of the United States Anti-Doping Association (USADA) of combatants Peter Quillin and Winky Wright, was scrapped at the last minute under questionable circumstances.

After taking one sample from each fighter, the organization claims that it called off testing because the window of time given (two weeks) was too narrow to go through proper protocol. Allegedly, when Wright asked for both samples taken to be analyzed, the USADA claimed that they had destroyed them.

As a result of this story, Quillin was painted as a cheat. Although never officially testing positive for a performance enhancing drug, the implication was that something shady was happening. The fighter was painted as guilty and many fans ran with the impression, posting accusations on message boards and in social media. This will be a label that, to one degree or another, will likely stay with the fighter for the rest of his career.

The circumstances under which the cancelled USADA testing of Quillin-Wright occurred sound suspicious, but there will never be a hearing to address the matter and, frankly, nobody under the current system can hear the case. So, to Quillin’s detriment, this will be something painted with the wide brush of rumor and agenda-driven propaganda.

The equal and opposite reaction of this PEDs grandstanding is that fighters may just assume everyone is on something and that they need to be on it, too. And since all of this testing is volunteered, they will simply stop volunteering.

This rush to judgement and the ego-driven need to “out” purported drug cheats as quickly as possible will kill any hope of ever having the PEDs issue addressed effectively. It’ll simply go underground and, like most of boxing’s ills, become part of the sport’s never-addressed forbidden zone.

Until that point where we can have a real and fair commission with which to process these tests and give fighters the due process they deserve, it’s all a “feel good” game. It’s a rather meaningless gesture in the grand scheme of things, basically pimping out the word on two or three fighters at the expense of the sport’s overall good.

The real battle is in establishing a legitimate federal commission for the sport. It’s a tougher battle than PEDs testing and it’s certainly not as sexy. It’s also a reform that would most adversely affect the sport’s power brokers who do not have the athletes’ or sport’s best interest in mind.

However, messing with boxing’s power brokers also messes with the way most major boxing media outlets get their funding. So, you will never see a concerted effort among the media’s biggest voices to enact this reform.

Instead, you’ll see a few rotten judges held up to scorn, a bumbling referee singled out here and there, and now, some alleged drug cheats suffer career lynchings without even having the benefit of a kangaroo court.

In boxing, it has always been better to look good, than to actually do good.