For those fans clamoring for bigger cards, better match-ups, and a more fan-friendly attitude to promotion in boxing, this Saturday will be their chance to bask in the glow of a well-constructed televised card. Not only will Showtime’s “Four Warned” show at The Home Depot Center in Carson, California feature four quality, meaningful bouts, but there will also be an internet lead-in via Showtime Extreme one hour before the main show starts. 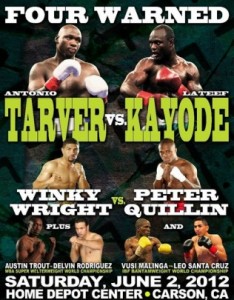 Showtime has done the internet lead-in before, but they haven’t put all of the pieces together like they will be doing for Saturday’s card.

Now, the ball will be in the fans’ court.

For all of the hand-wringing and bellyaching generated by boxing fans, these same fans have also been slow to support innovative, fan-friendly changes made to resolve long-standing complaints.

Quality undercards to pay-per-view events have been met with ambivalence, attempts to build new stars have often been met with downright scorn. Even the World Boxing Classic super middleweight tournament, which became the darling of the boxing press, never managed to spark any great tidal wave of popularity, nor did it spawn any real superstars.

To this day, boxing remains a star-driven sport that, to its detriment, seems only focused on stars that have already been made.

Still, for those interested in well-crafted, meaningful match-ups, “Four Warned” is a dream come true. Sure, all eight fighters, together, couldn’t outdraw a Manny Pacquiao karaoke concert, but for purists, this show is a nice change of pace. We’ll just have to see how many purists are still out there.

Here’s a look at the televised card as well as the supremely solid off-TV card:

There’s no real world title involved in this 12-round cruiserweight bout (unless one considers the IBO title as real), but this is a contest between two legitimate Top 10 fighters. Tarver is a 43-year-old 3-time world light heavyweight titlist while Kayode is a 29-year-old upstart taking a huge step up in class. Kayode has proven to be solid, but not spectacular against mid-level opposition. Meanwhile, Tarver has faced pretty much every top light heavyweight of the first decade of the 21st Century. Unfortunately for Tarver, through his last days at 175 lbs. to his one-fight experiment at heavyweight to his ninth round stoppage of Danny Green last year, he hasn’t impressed in a very long time. Tarver is also not the type of wily veteran who can take a young fighter to school, unless that young fighter is supremely unschooled. Kayode could very well win this one on youthful aggression, alone.

This 10-round middleweight bout could be seen as a passing of the torch contest, but with only one fight in five years, Wright’s torch has long been extinguished. In his most recent fights, the 41-year-old Wright’s only remaining game has been his trademark high-guard defense and enough of a ring IQ to avoid being hurt. Given that his last win was against Ike Quartey in 2006, Wright’s challenge to 28-year-old Quillin is mostly hypothetical. “Kid Chocolate” Quillin, has an uneven resume filled with journeymen with a few solid veterans thrown in every so often. Most recently, Quillin looked solid against fringe contender, Craig McEwan. Wright-Quillin should be all Qullin, all day. But if there’s even the slightest spark of the Winky who beat guys like Shane Mosley and Feix Trinidad, things could get real interesting. Don’t count on it, though.

Do we need to pretend that Trout is a world champion? The 26-year-old southpaw from Las Cruces, New Mexico has a supremely slim resume, yet is somehow recognized as a junior middleweight world champion by the WBA (not to be confused with the WBA “super” junior middleweight world title recently won by Floyd Mayweather against Miguel Cotto). Still, Trout has looked solid and well-schooled whenever he steps into the ring. Against a fairly-seasoned veteran like the 32-year-old Delvin Rodriguez, Trout will be tested for the first time in his young career. Rodriguez has perpetually been regarded as a good fighter with most of the tools to be a top fighter, but he has yet to develop up to the level of his abilities. At this stage of his career, it might be too late to step up now, but he has a chance to make some waves with a win over Trout. There’s no doubt that Rodriguez is the more experienced and well-seasoned fighter, and from his two fights with Pawel Wolak, it could also be assumed that he might be the mentally tougher of the two. That means that Trout’s entire chance of victory rests on his ability to put on a boxing clinic against his more basic-skilled fighter. Trout has never been pushed to that degree and just may falter under the pressure.

On the surface, this bout for the vacant IBF bantamweight title may look to be a veteran vs. novice battle. Malinga, after all, has been a ranked bantamweight for the better part of seven years while Santa Cruz, seven years ago, had yet to get his professional career off the ground. But the 32-year-old South African, Malinga, has been one of those sanctioning body darlings who always seems to find himself ranked somewhere, regardless of his level of opposition. A quick look at his resume shows just a couple of names worth noting and a one-round blow-out at the hands of his best opponent, Hozumi Hasegawa. Santa Cruz, on the other hand, got most of his seasoning as a well-regarded amateur, putting together a record of 148-7 and acquiring the reputation as a “can’t miss” prospect. As a pro, the 23-year-old has been handled carefully and put in the ring with the usual cast of journeymen and club fighters. Against Malinga, the Mexican rising star will be taking a full step up in class, but taking into consideration Santa Cruz’s pedigree and the fact that Malinga is coming off twenty months of inactivity, it would be tough to bet against the younger fighter.

For those at The Home Depot Center and those watching the Showtime Extreme internet stream, the undercard of this show will also be unusually deep. Highlighting a four bout off-TV undercard is a super middleweight battle pitting two fringe contenders against one another when Sakio Bika (29-5-2, 20 KOs) faces Dyah Davis (29-2-1, 9 KOs) in a ten round contest. Also, lightweight prospect, Sharif Bogere (22-0, 14 KOs) will take on well-traveled journeyman, Manuel Leyva (21-6, 12 KOs).

The Showtime telecast will air on Saturday, June 2 at 9 PM ET/PT with the preliminary bouts aired on Showtime Extreme one hour earlier.