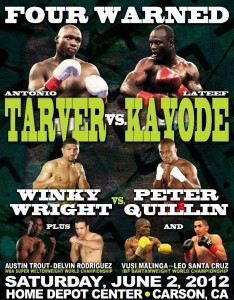 Most expected Kayode’s inexperience and emotions to get the better of him, but he came out boxing patiently and moving, only occasionally landing his right hand as Tarver stalked him without offering much offensively. Kayode stuck his right hand in Tarver’s supple mid-section a few times in the second round as Tarver pursued. Tarver didn’t land much until the third round when he landed two good right uppercuts, prompting Kayode to open up and land a few of his own wild shots in return. At times in the early rounds the crowd voiced their displeasure with the lack of action in the fight.

Tarver began to wobble Kayode with his one-two combination in the sixth, and would nearly drop him with the same in the eighth. Tarver was unable to put Kayode down, and responded well to Kayode’s wild onslaught that followed.

Both men were running on empty in the championship rounds. Tarver stuck with what had worked in the fight – his straight left behind his right jab – while Kayode boxed and tried to land a big right hand. The judges at ringside scored the fight 115-113 for Tarver, 115-113 for Kayode, and 114-114, resulting in a split draw. The Boxing Tribune also scored the fight a draw

Peter Quillin (27-0, 20 KOs) remained undefeated by scoring a ten-round unanimous decision over 40-year-old Ronald “Winky” Wright (51-6-1, 25 KOs). Wright, who hadn’t fought since a 2009 loss to Paul Williams, made the fight more competitive and exciting than expected, despite the wide scoring.

Wright found success with his right jab early on, as Quillin got comfortable landing his right hand over Wright’s left hand along with a counter right uppercut. The right hand of Quillin landed more often as the fight wore on and as Wright began to land his left hand. In the fifth round a counter right hook landed on Wright’s chin and sent him to the canvas. Quillin, sensing that Wright wasn’t very hurt, stayed patient when the fight resumed, and Wright survived the round.

Quillin varied his attack in the middle rounds as the older Winky Wright began to slow down, looping his right hand around Wright’s famed shell defense. And in the eighth round Quillin nearly dropped Wright with a right uppercut thrown while employing the shoulder roll defense. Quillin jumped on Wright in the closing seconds, landing several hard right hands and left hooks as Wright tried to weather the storm from inside his shell.

Austin Trout (25-0, 15 KOs) retained his WBA jr. middleweight title and stayed undefeated with a unanimous decision victory over former world title challenger, Delvin Rodriguez (26-6-3, 14 KOs). The fight delivered only a few moments of excitement, as both men came out cautious in the beginning and stayed that way through five rounds, landing only occasional straight rights and lefts.

Trout began to control the pace of the fight in the sixth, as he landed his straight left hand a few more times. Rodriguez was still unable to figure out the puzzle in front of him, often missing with his punches as Trout ducked and dodged out of the way. Rodriguez had his best round in the eleventh, landing uppercuts along with a short right hand that he found occasional success with in the earlier rounds.

The end of the twelfth round showcased the most action of the night, as Trout landed a right uppercut that snapped back the head of Rodriguez, who came back to land two right hands of his own in the closing seconds. Judges at ringside scored the fight 117-111, 118-110, and an eye-catching 120-108. The Boxing Tribune scored the fight 117-111 in favor of Austin “No Doubt” Trout.

Leo Santa Cruz (20-0-1, 11 KOs) pitched a shutout over former bantamweight title challenger, Vusi Malinga (20-4-1, 12 KOs) to win the vacant IBF bantamweight title. Malinga, who stood in the pocket and elected to trade with the much younger Santa Cruz, made the fight competitive with his willingness to trade and his complete lack of any lateral movement.

Santa Cruz went to work on Malinga’s body from the opening bell and never let up. His left hook to the body opened up opportunities upstairs as Malinga became wary of Santa Cruz’s shots to his rib cage. As the body work took all of the steam out of Malinga’s punches, Santa Cruz landed an overhand right more freely, as he dominated the 32-year-old Malinga from start to finish. Judges at ringside scored the fight 119-109 and 120-108 (twice). The Boxing Tribune scored the fight 120-108 in favor of Santa Cruz.