It was a fight widely expected to be announced on the undercard of ‘that bill’.

You know the one.

The one categorically NOT being promoted by Frank Warren.

The venue was seemingly tailor-made for a showdown between Britain’s top two lightweights, Ricky Burns and Kevin Mitchell. 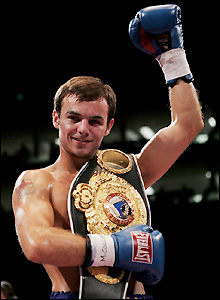 Apologies to Gavin Rees and Derry Matthews, who may wish to contest that point and indeed WILL be contesting for the British and European straps next month, but in my opinion Ricky and Kevin are the #1 and #2 in a very competitive and relatively deep division domestically.

Upton Park is home to Mitchell’s beloved West Ham United and I believed that this fight would be the main undercard fight before Messrs (not to be confused with Messers of course!) Haye and Chisora did their thing in the ring.

The Daily Mail ran a piece confirming that they had been added to the bill on the 10th May. Even quoting Ricky who said he couldn’t wait to get back in the ring at the venue where he lost his only pro career fight in a shocking 3 round defeat to Michael Katsidis in 2010.

But the fight wasn’t added to the bill. As usual, a number of reasons were offered and debated across the forums.

The most plausible seems to be that Burns, who took some time off to get married after his win against Paulus Moses, felt unable to get ready in time.

Hey! I’ve been to Mexico on holiday too. The tequila is most excellent! My scales groaned when I got home.

There have been assertions that one or other of the fighters had been wary about testing the resolve of the British Boxing Board of Control who threatened to suspend anybody involved with the July 14th bill. That’s not unfeasible either.

There have also been assertions that Burns just didn’t fancy it though his performance against the same man that cleaned Mitchell out in 3 rounds surely puts that accusation to bed.

Mitchell has suggested that it’s now looking likely for September, which gives Burns adequate time to get his fitness up and his weight down. The venue is unclear. I’ll warrant that this will happen north of the border.

But my concern is for Mitchell’s activity. Or lack thereof.

He claims to be a fighter that doesn’t need to be in the ring regularly.

He also has a credible 34 pro fights to his name which considering his age (27) is a better run rate than a few of his domestic contemporaries.

But the last couple of years have been very stop-start and many would agree that by now the ‘Dagenham Destroyer’ should really have a version of the world title of his own, or at least have had a tilt at one.

(A proper one – I don’t count those silly ‘interim’ titles!)

Kevin has had just 5 fights in 2 and a half years and for a man trying to push himself into the argument for title shots on foreign shores against marquee names, as the likes of Macklin, Martin Murray and John Murray (who Kevin beat convincingly a year ago) have done by catching the eye of promoters and TV network bosses looking for a sellable opponent, this simply isn’t enough activity.

Having put some solid wins together at super featherweight, Kevin put himself on the map in the lightweight division with a comprehensive deconstruction of Colombian Breidis Prescott in December 2012.

Prescott was coming off his first career loss to Miguel Vazquez, but was only 2 removed from his own moment of glory in the infamous 60 second wipe-out of Amir Khan.

Mitchell was back again 3 months later to starch Ignacio Mendoza in 2 rounds and take the WBO Intercontinental strap, setting up the Katsidis fight in May of 2010.

Mitchell wasn’t the same fighter in that fight and his dismal performance was attributed to trouble in his personal life and poor preparation, physically and mentally.

14 months passed before ‘Mighty’ Mitchell got back in a ring and he was back with a significant bang, dealing out an 8th round stoppage in a domestic ‘Fight of the Year’ against Murray.

To give context to that stoppage, it took a noticeably weight-affected, but physically larger on fight night Brandon Rios 11 rounds to stop Murray. Mitchell’s win was highly impressive.

Wind forward another 7 months and Mitchell takes a wide points victory in a 10 rounder against Felix Lora in a junior welterweight fight. Obviously a ‘stay busy’ bout for Mitchell, but after a big win like Murray in July one has to wonder why the title shots didn’t come.

Mitchell will have been waiting another 7 months for Burns to be ready for their bout.

That’s not even a 2 fight a year average.

And even if Mitchell IS a fighter that doesn’t need regular outings, his lack of activity is surely holding him back and is depriving the British public of exposure to someone this writer happens to regard as possibly one of, if not THE most talented British boxer on the scene right now.

I liken Mitchell to the Wayne Rooneys and the Ronnie O’Sullivans of British Sport. Mercurial, endlessly talented, but prone to distraction and in need of careful, ‘caring’ management to get the best out of him.

I’m not sure he is getting it. I don’t think he is the only one not getting it.

Recent departures from Camp Warren suggest that others are being neglected at the expense of spectacle fights and have voted with their feet.

They say ‘Time and Tide waits for no man’.

In this game you can be relevant for your entire career, a run of 10 fights. Or just 1!

Come on Kev, get busy boxing!