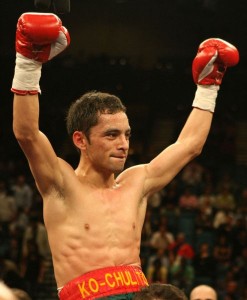 Montiel is on the last legs of a very solid sixteen year career and is just seven months removed from a loss to junior featherweight contender, Victor Terrazas. In his last contest, Montiel stopped international fall guy, Angky Angkota in nine rounds at the featherweight limit. This Saturday’s bout is by no means meant to be anything other than a light snack en route to another money fight for the former world titlist.

Reyes is a 26-year-old battler picked from the Mexican club circuit. Despite holding some minor regional titles, the native of Nuevo Laredo, Tamaulipas, Mexico has been in against very light competition, with only three of twelve opponents having a won-loss record above .500. Reyes’ last four opponents had a combined record of 43-62.

There have been conflicting reports as to whether the Rubio bout will still be on the card. And given that the fighter’s name has been left off the official fight poster, chances are that he might not be. In either case, The Boxing Tribune will have a full report from Saturday’s card in Chihuahua.