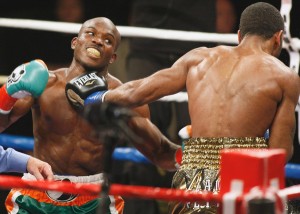 Now that the introductions have been made and the formalities dispatched, we take a look at 10 things that the Desert Storm must do to defeat the mighty Manny Pacquiao.

10. Use your legs to keep you moving in a constant rhythm. However, don’t settle into a pattern. Between rounds Pacquiao will seek his corner’s advice to modify their plan of attack and Freddie Roach will pick up on your subtle adaptations; so keep moving and don’t be predictable in your approach – Use what works; with a fighter like Manny Pacquiao (who sets up traps and uses his superior reflexes to engage in the moment), it will be imperative to pounce on every opportunity he gives you. Manny lures fighters in and uses his exceptional speed to land wicked shots before moving out of range, so timing the openings he gives you will be of the utmost importance.

9. In what was no doubt a pivotal fight for you over in Nottingham, England you were able to annex the durable Junior Witter’s WBC jr. welterweight crown just 60 miles from his birthplace, which was almost 6,000 from your own. You’ve turned away other notable challengers on the road, too. So, when you meet with Manny Pacquiao Saturday night at the MGM Grand in Las Vegas, Nevada, you will need to be prepared to not only fight in Manny’s adopted backyard but potentially against a hostile crowd (and a possible one-sided judging panel), as well.

8. Manny Pacquiao looks to be a bit physically smaller than we’re used to seeing him as of late – This is most likely by design as Freddie and Alex no doubt have the Pacman tuned for velocity of movement in response to the massive frame you will bring to the ring on Saturday night. Pacquiao’s team doesn’t think that you will be able to cope with the differential in speed and are willing to bet Manny’s title on it. This must not just be a paycheck for you, if their team chose you it was because they figured that they possess tools that you won’t be able to cope with. You must impose your will on Manny Pacquiao. You must fight like a man starving for opportunity, hungry for success and willing to do anything to dethrone the champion.

7. Volume. Throw enough punches that Manny never gets comfortable – eliminate his momentum. Be first and keep the shots coming. If Pacquiao starts off an exchange, chances are high that you’re getting hit multiple times before you can get out of range, so time him when he starts to lunge into your strike zone, spin to your left and launch your own salvos. Stylistically, Pacman prefers to fight guys who charge straight in – he typically gobbles up this type of fighter and you can count on his team preparing for you to fight in this manor…Augment your plan of attack to compensate for this, feint jabs and use deception to break his guard, circle to the left and walk Pacquiao to the ropes. Miguel Cotto had him pinned on the turnbuckle several times but failed to capitalize on the situation – Manny is often open to the gut as he does his ceremonial ‘waving in of the attack’ with his back on the ropes, don’t squander opportunities like this.

6. Use your right hand intelligently but not sparingly. Southpaws are generally suckers for a crisp orthodox check-hook and a straight right down the pipe. Your biggest opportunities will come from the openings that you create – Spin Manny; Shane Mosley showed how easy it could be to turn Manny Pacquiao and keep him from planting his feet. Turn him as he looks to engage and touch him to the arms and body. Pacquiao has problems resetting and readjusting without Roach in his ear, and you can use this to momentarily disrupt his rhythm.

5. Aside from a small loyal contingent of Desert Storm supporters, most fight fans aren’t giving you a massive shot at beating Manny Pacquiao come Saturday night. Dollars to pesos, if Team Pacquiao were instead fighting Floyd Mayweather in their next bout, you can bet that the camps’ distractions would be so minimal at this crucial time that the defending champions’ focus would be unquestionable… Let’s be totally honest for a moment: You were carefully selected for this assignment from a very short list of beatable (beaten) opponents, and on paper, you have the “0” that looks great in commercials and on fight advertisements. Realistically however, most people are sleeping on you and your chances – Your promoter, your opponent, some fight fans…Most are counting on you to lose. Their oversight should be your boon – Use their lapse in judgement as a spring board to propel yourself into super-stardom. A big win here will not only shake up the boxing landscape and secure more lucrative paydays but a victory on Saturday could easily translate into a mega clash with Floyd Mayweather in December or sometime early next year.

4. You’ve been relegated by major betting websites who have you listed as a 5-to-1 underdog. The consensus is that Timothy Bradley loses to Manny Pacquiao under almost any circumstance. Harness your inner Buster Douglas…The man was an incredible 42-to-1 long-shot, fighting away from home against the biggest star of the time and pulled off a colossal upset. Better yet, summon the fighting spirit used by none other than Congressman Pacquiao himself when he usurped the aging Golden Boy’s throne (who was ill-equipped for the onslaught brought to him by the younger, stronger challenger) by way of overwhelming and relentless force. Swarm, your unprepared enemy and pepper him with a deluge of well placed shots … make him consider retirement!

3. Don’t get caught in the moment and have a fire-fight with arguably the second best fighter in the world; you’ll likely end up featured after Ricky Hatton in a knockout montage somewhere on the internet. Roach and Pacquiao have planned and prepared for you to charge in dangerously and one can only assume that they’ve readied counter right hooks and uppercuts with your name inscribed on them. If you fail to exercise appropriate caution chances are you won’t see the final bell.

2. This may sound obvious but your ultimate goal come June 9’th should be a clear and unquestionable victory. Ordinarily in combat sports winning is a black and white issue. In boxing this isn’t always the case as our sport seems to be occasionally plagued by bad decisions, gift judgements and/or outright robberies. If your fight goes all scheduled 12 rounds, It will be most important to take the choice out of the judges’ (sometimes inept) hands, so each round must be contested with ferocious energy. Don’t give any indication that you’re tired, hurt or otherwise totally in control if you hope to secure some kind of points win.

1. Means to an end – You may fight for Top Rank now but make no mistake, Pacquiao is the house fighter and you’re the ‘B’ side. There is an expensive mahogany desk somewhere with a fail-safe plan in place in the event that you do unseat the Filipino dynamo, but I can assure you that Bob Arum and TR will do everything within their power to ensure that Manny Pacquiao retains his title come Saturday evening. This means you may want to consider seeking some alternative avenues in order to secure the W. When Victor Ortiz fought Floyd Mayweather, a major strategy they were counting on to unsettle the normally unfazeable Mayweather was to rock him with illegal head-butts – Ortiz was able to get away with 4 out of 5 of such infractions which did indeed momentarily shake Mayweather’s focus. This tactic seems to be a logical choice for a fighter who’s not only blessed with a capacious cranium, but one who is also desperate for victory. Contrary to your recent track-record, you didn’t often come in with your head down (if you hadn’t heard, you’re infamous for clashes-of-heads ) during your previous match with the ghost of Joel Casamayor…And I am in no way suggesting that you head-butt Manny Pacquiao to force a stoppage, but if you’re suggesting that you haven’t come in on past opponents with intentions of butting them then I think we are at an impasse, sir. Whatever the case is, good luck, champ!