Here’s a look at what The Boxing Tribune staff thinks will happen this Saturday in Las Vegas:

I’ve been bothering people and raising eyebrows since 2010, saying that Tim Bradley would beat Manny Pacquiao. Now that the time has come to prove my acumen, I’m re-thinking my long-standing prediction. Bradley is young, hungry, and athletic. He’s also the first fighter that a main stage Pacquiao has fought, possibly ever, at the height of his career trajectory, rather than on the downside. But Bradley is not a puncher who can hurt Manny and he’s not really a tactician who can box rings around Pacquiao’s obvious technical flaws. Bradley is just a guy who’s tough and fights really hard– and that’s what Pacquiao does best.

I’m not back-tracking on my prediction, but the reality may be that Bradley just doesn’t have enough to stop Pacquiao and doesn’t carry enough clout to take a decision against Manny in Vegas. So, my official prediction is a close unanimous decision win for Pacquiao that will be angrily (and rightfully) disputed by Bradley fans. 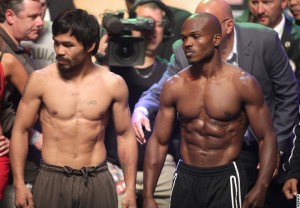 I expect a fairly close fight for the first six rounds or so, with Bradley having his best moments in the first few. But as the fight goes on, Pacquiao’s power, speed, and varying angles will frustrate Bradley, who will likely revert from whatever game plan he’s been talking up and he’ll walk into something that puts him down. As per usual he’ll get up, only to have the referee stop the fight somewhere in the 8th round

Unfortunately I see one guy losing, one guy winning, and the fans losing. I expect Bradley to come out very aggressive, excited for the moment. Pacquiao is no stranger to contact and will win the early rounds with his speed and movement. Pac-man’s experience in aggressive fights will serve him well as he lands the harder punches in exchanges and drops Bradley at least once in the early rounds. Bradley, being the tough warrior he is, will come back even more aggressive. That aggression, Bradley’s tendency to lead head first, and the southpaw vs orthodox match-up will lead to several nasty headbutts that have Pacquiao bleeding heavily by the middle rounds. The determined Filipino star will fight through the blood, but somewhere around the eighth round doctors and referee will decide the cuts and blood are too much and too dangerous to continue bringing an anti-climactic ending to a fight that was getting more and more interesting. Bradley will win some rounds but Pacquiao’s early control and knockdowns will give him the edge on the cards with the technical decision ending.

Pacquiao is coming to a crossroads where his out-of-ring commitments are trampling on his efforts between the ropes. I worry that some of Manny’s recent and best wins have been tainted in some way (De La Hoya, Cotto, Margarito – weight; Mosley, Clottey – motivation; Marquez – judging). This time Pacquiao is up against a hungry, unbeaten fighter in his prime, and a genuine world champion in his own right. I was hugely impressed with Bradley when he came to the UK and took the title from the awkward Junior Witter, and still more impressed when I saw him clocked by huge punching Kendall Holt in their first round – Bradley admitted later he’d been hurt badly, but he still had the presence of mind to take a knee and then took the fight to Holt. Unfortunately, the fight is in Vegas and a lot of stakeholders stand to lose fortunes should Bradley scupper future plans, so that a dodgy decision is always a possibility, but despite that I still take Bradley to eke out a close decision.

I’m intrigued by this one. My instinct tells me that Arum isn’t quite done milking the Pacquiao cow just yet and Bradley has been offered up because he is young, unbeaten and can answer a few of criticisms leveled at Pacquiao’s more recent foes, yet they know full well that Pacquiao beats him comfortably.

But there is just something niggling me. What if Pacquiao has lost the fire in his belly? What if he just isn’t up for Bradley in the same way he would be for a Marquez or a Mayweather. What if Bob actually wants to develop a new American superstar or simply wants to see Pacquiao struggle or take a loss to lure Mayweather in (depends on the assumption that Mayweather is the one sandbagging which I’m not buying anyway).

Manny Pacquiao is, in theory, as beatable as he has been at any point in his career. His personal, political, financial, and spiritual gremlins are nipping at his heels, Freddie Roach is making rumblings about Pac’s potential retirement, Tim Bradley looks like a Greek god. Manny Pacquiao will fall in spectacular fashion like a Greek tragedy…

Just not in this fight. Tim Bradley has the style and the lack of power that Pacquiao should feast on. If anyone’s going to knock Pac into retirement, it will be a defensive fighter, a counter puncher, or else a guy who hits so hard that he’ll be able to trade shots with a legend and come out something other than second best. Tim Bradley is just plain not that guy. Expect Bradley to bring his best for the first three or four rounds, trying to frustrate and wear down Pacquiao…and expect Manny to weather the storm and battle back before closing the show in spectacular fashion. This fight will draw comparisons to Ali-Foreman…with Pacquiao in the role of Ali. Pacquiao KO8.

Manny Pacquiao has his normal array of distractions outside of the ring and appears smaller than we’ve seen him recently, which indicates to me that Freddie and Alex have him tuned for speed. It seems as they’re confident that the impeccably conditioned Desert Storm will be unable to impose his size on them based on the perceived gap in reflexes. On the other hand, the Tim Bradley who has been training for this particular fight is starving for both opportunity and recognition. I think that Bradley’s unbelievably toned physique shows how determined he is to score a career-best win on Saturday. That being said, the odds of Bradley stopping Pacman seem long, the chance of a points victory in Vegas against the TR cash cow? Let’s just say that after the Rios/Abril fiasco, the only way I can see to beat a favorite such as Pac is to knock him out cold – Manny has superior hand speed, power and world-class experience. Manny Pacquiao by uncomfortably close SD.