Timothy Bradley (28-0, 12 KOs) is largely unknown outside of hardcore boxing circles. In the promotion for Saturday night’s WBO welterweight title fight at the MGM Grand Garden arena in Las Vegas, Bradley has done something that none of Pacquiao’s recent opponents have done. He’s provided an interesting foil for the quiet, soft-spoken Pacquiao. And the list of pundits picking Bradley to upset Pacquiao has slowly grown. 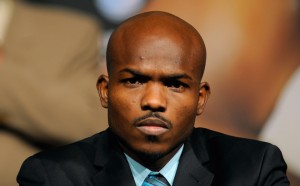 But despite all of the confidence on display, Bradley’s brash predictions have played second fiddle to Pacquiao’s religious awakening in the mainstream media. Being Overshadowed is not new to Bradley, however, as he’s flown under the radar for the majority of his career.

Bradley’s early fights on Showtime helped introduce the newly-crowned WBC jr. welterweight titlist to a crowd that watches boxing anytime it’s on TV, and they showed the many facets of the pride of Palm Springs, California. Unfortunately for Bradley, he languished in relative anonymity with the mainstream audience, despite the nice pay raise he got from graduating up to the Showtime airwaves. His fights did modest ratings on Showtime while his live gates stagnated.

Bradley was forced to travel across the pond to challenge for Junior Witter’s WBC jr. welterweight title for his first shot. And when he won a split decision victory and came back home as a champion, his first defense came in front of a sparse crowd against Edner Cherry in Mississippi.

Co-Promoter Gary Shaw went so far as to make Bradley’s next title defense against Kendall Holt the headliner of a Canadian-heavy undercard in Montreal. And in a fight where Bradley was dropped and badly hurt early on and forced to adjust in order to win, his star failed to grow.

Shaw brought Bradley back home to the Agua Caliente Casino in Rancho Mirage, California (a stone throw from Palm Springs) for his next three fights, and the turnout in each fight was modest, at best. In the third of the aforementioned fights in his backyard, Bradley took it upon himself to call out Manny Pacquiao after scoring his first welterweight win over Luis Carlos Abregu. Naturally Bradley’s challenge was laughed off, as Top Rank’s stable was still stocked with viable challengers to Pacquiao’s throne.

But after the box office failure that was Bradley’s January 2011 jr. welterweight unification bout with Devon Alexander, Bradley and Shaw eventually split after Bradley turned down a unification offer from Amir Khan later that summer, citing issues with his promoters, Shaw and Thompson Boxing. The rift between Bradley and Shaw/Thompson eventually cleared the way for his deal with Top Rank, and all but helped ensure his shot at Pacquiao.

Now, after Pacquiao has made his way through all of the marketable welterweight names on Top Rank’s roster, it’s Timothy Bradley’s turn to take his shot. It’s the shot he’s been waiting for his entire career, and he’s exuded the confidence of a fighter to whom defeat is not an option. The guy who used to fight for peanuts in lumber yards and small ballrooms in Southern California has gotten to where anyone who chooses to box professionally wants be. He’s fighting boxing’s second biggest cash cow, making the biggest payday of his career in front of a (hopefully) packed Las Vegas audience and on pay-per-view.

Like it or not, Timothy Bradley has arrived at the big boys’ table. You may not like the fact that he left some food on the table in the jr. welterweight division, or that he didn’t eat his steak before moving on to his dessert (Bradley actually adopts a vegan diet while in training), but he’s here standing across from Manny Pacquiao. And win, lose, or draw he’ll be around for a while. If Bradley wins he’ll have the full attention of boxing’s most efficient public relations machine, and if he loses he will have the exposure of Saturday’s event to propel his star as he continues through the physical prime of his career.

Manny Pacquiao (54-3-2, 38 KOs) is the heavy favorite, and rightfully so. He’ll have the advantage in speed, power, and big-stage-experience. But Bradley is the more hungry of the two. While I don’t buy into the constant stories of outside distractions from Pacquiao’s camp, he does carry himself like a guy with one foot out the door.

Timothy Bradley is the guy ready to shove him out the door and stake his claim as the alpha dog in the room.