Saturday’s card at the MGM Grand in Las Vegas made for big changes in the welterweight Top 10.

With three ranked fighters competing on the card (Manny Pacquiao, Mike Jones, Randall Bailey) and a fourth ranked fighter moving up to compete at 147 (Timothy Bradley), big changes were expected. However, the evening’s two upsets definitely shook things up. 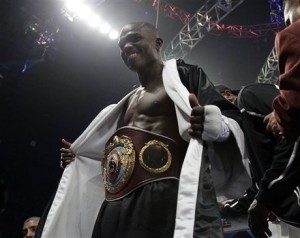 With Timothy Bradley’s controversial split decision win over Manny Pacquiao, there’s only one place for him to debut– at #1. Pacquiao, of course, moves down from his #1 spot to become a close #2.

On the Pacquiao-Bradley undercard, tenth-ranked Randall Bailey scored an upset TKO 11 win over second-ranked Mike Jones. As a result, the new IBF champ, Bailey, moves up to the #4 slot at welterweight while Jones falls to #7.

With the debut of Bradley, Carson Jones falls from the Top 10.

With Bradley now ranked at welterweight, he vacates his #1 spot atop the junior welterweight division. As a result, everyone moves up one spot in the 140 lb. Top 10, with Lamont Peterson now assuming the #1 ranking and Lucas Matthysse debuting at #10.

Also at the MGM Grand, second-ranked junior featherweight, Guillermo Rigondeaux, scored a dominant TKO 5 win over Teon Kennedy. However, the victory over the unranked Kennedy wasn’t enough to move past #1 ranked, Toshiaki Nishioka.

Check out the full rankings, HERE