If one were inclined to believe in conspiracy theories, what happened Saturday night at the MGM Grand in Las Vegas would be boxing’s equivalent to the Kennedy assassination.

Promoter Bob Arum, without a real, economically viable opponent for his cash cow, Manny Pacquiao, works to manufacture one. The decision is made to give this one to Bradley and build to a grudge rematch in November. Bradley was expected to give Pacquiao a tough fight, anyway, so a close nod in his favor wouldn’t be too much of an outrage. 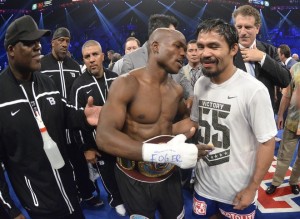 However, as it would turn out, the fight wasn’t close. Bradley was outclassed and, by the time Pacquiao took his foot off the gas in the seventh round, the fighter from Palm Springs was discouraged, dissuaded, and just hanging on for the ride.

The decision was given to him anyway, even surprising most of his own people.

But, according to the new mantra of the boxing media intelligentsia, corruption in boxing is vastly overstated. Most poor calls and questionable decisions, they say, can simply be chalked up to the ineptitude of select officials or, perhaps, lack of knowledge on the part of the fans.

So, maybe there’s another reason, other than flat-out thievery, why Manny Pacquiao, who dominated Saturday’s fight, wound up losing on two of the three cards.

Maybe Duane Ford and C.J. Ross, who scored the fight 115-113 for the challenger, were impressed by Tim Bradley’s quiet resignation or the way his abs glistened under the ring lights. Whatever the case, the right man didn’t win and there are dozens of viable theories as to why.

Arum has intercepted much of the post-fight uproar with his own maudlin appeals for an “independent investigation” by the Nevada State Athletic Commission before he agrees to green-light the contractually mandated rematch. Even Timothy Bradley added to the theater of the absurd, showing up at the post-fight press conference in a wheelchair and claiming two bum feet as the reason why he looked so much like the loser in a bout he won.

Of course, Arum is famous for drowning out and confusing criticisms with copious amounts of nonsense and misdirection issued to a quote-hungry media. Words begin flying around, headlines bounce against one another, and the public discourse degenerates into one big mish-mosh of half-completed ideas and odd rumors while Arum steps to the side and continues conducting his business.

There’s nobody who rattles the media monkey cage better than zookeeper Arum. He is just so much smarter than most in the media and he wields his PhD’s  in street hustle and human manipulation  like a sword. Those who don’t immediately buy into his routine usually get won over, at some point, by the perks of being friendly with, arguably, the most powerful man in the sport.

While the boxing media is engaged in vapid busy work, like wasting hour after hour taking pictures of fighters hitting heavy bags, there are deeper issues that need to be addressed.

While ego-driven pseudo-journalists chase after vials of piss and platelets of blood in order to pen painfully first-person accounts of their awesomeness, the nuts and bolts of a crisis go ignored.

The putrid Pacquiao-Bradley decision should give fans and media a clear idea of what is the main problem plaguing the sport.

All of this would be handled by an independent national commission. More importantly, it would be handled in full transparency, but out of the fans’ faces. Boxing fans could then get back to actually thinking about the sport and not testosterone levels and contractual stipulations.

In the case of Pacquiao-Bradley, maybe overturning the decision would be too heavy-handed. But a real commission could certainly remove the judges from the available work pool so that, whether crooked or inept, their poor performance results in a permanent or temporary loss of a job.

Under the current system, punishing conveniently bad judging works against the best interest of the sport’s power brokers, who depend on “pliable” and/or inept officials as essential business expenditures.

Texas judge, Gale Van Hoy, didn’t get a lifetime ban for his horrid work. He didn’t receive any sort of sanction at all. As a matter of fact, his poor calls in favor of hometown and/or “money” fighters led to bigger and better gigs, a trip to Germany, and the privilege of presiding over seven straight WBC-sanctioned title bouts.

A couple of years ago, I naively tried to rally “Independent” media sources to campaign for a national commission. What I got back was silence and a few “mean girl” counter-attacks from those looking to ingratiate themselves to the “big boys” in the media.

So, if there’s ever a push to implement a true commission, it won’t be coming from the media who are, in many cases, subsidized by those with the most to lose if the sport managed to clean itself up.

Ultimately, the push to reform will be determined by the fans and their willingness to keep paying for a product that compulsively insists on insulting their intelligence.

You can email Paul at paulmagno@theboxingtribune.com or feel free to stalk him online like many of your favorite writers do .  Paul is a full member of the Burger King Kids’ Club, a born iconoclast, and an ordained minister in the Universal Life Church.