There should be no shame in losing a fight, unless you quit or make up an excuse like breaking your toe. The boxing media will never forgive you for that and will constantly remind you every chance they get.

On Saturday night many of us witnessed one of the biggest screw jobs in boxing history. It wasn’t the worst, but the cries of corruption are loud and clear because it happened to the most popular figure in boxing. 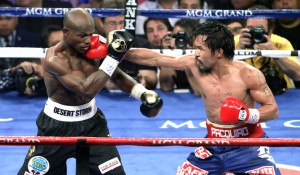 Manny Pacquiao’s split decision loss to Timothy Bradley is not the final nail in boxing’s coffin. Sure it’s a blemish on Pacquiao’s record, but in the grand scheme of things this loss doesn’t hurt his legacy one bit.

Bad decisions are commonplace. Corruption is the norm. Boxing will live to see another day.

However, there is a difference between inept judging and corruption. Many “journalists” have classified Saturday’s occurrence as poor judging as they continue to repeat the company line that’s fed to them by Top Rank and the Nevada State Athletic Commission.

The most likely explanation is that Bradley’s victory over Pacquiao was a business decision, as was Pacquiao’s victory over Juan Manuel Marquez in November.

So in honor of Manny Pacquiao’s screw job I have assembled the five worst decisions of the last five years in chronological order along with a special bonus selection.

I could go back and list the worst screw jobs since 1884, but that would just be showing off.

Sergio Martinez-Kermit Cintron
February 14, 2009 ? Sunrise, Florida
Result: Majority Draw
Official scores: Tom Kaczmarek 116-110 (Martinez), Ged O’Connor 113-113, Peter Trematerra 113-113
Remarks: Sergio Martinez was robbed of a victory thanks to referee Frank Santore Jr. The hijinks began in the seventh round when Martinez dropped Cintron with a left hand. Cintron was unable to get up before the referee’s count of ten and the fight was over. However, Cintron convinced the referee that he was knocked out due to a clash of heads and Santore inexplicably restarted the fight. Replays clearly showed Martinez delivering a knockout punch. To add insult to injury, Santore deducted a point from Martinez in the twelfth round for hitting behind the head. That point cost Martinez a unanimous decision victory. So to sum it all up, Martinez was jobbed out of a victory two times in a 30-minute span.

Paul Williams-Erislandy Lara
July 9, 2011- Atlantic City, New Jersey
Result: Majority Decision for Paul Williams
Official scores: Hilton Whitaker 115-114 (Williams), Donald Givens 116-114 (Williams), Al Bennett 114-114
Punch stats: Williams (200/1047), Lara (224/520)
Remarks: Paul Williams displayed courage in receiving a one-sided beating from Erislandy Lara. The punch stats are misleading, but they tell a story of a man throwing everything he had left despite being pummeled with clean and effective punches. Williams not only received a brutal beating from Lara, he also received one from the media due to this hideous decision. It wasn’t his fault that three corrupt judges gave him an undeserved victory. In the aftermath of this epic screw job, the New Jersey State Athletic Commission suspended all three judges and ordered them to undergo additional training before they get to judge another boxing match. Nearly a year later, these three shameless judges haven’t had the chance to render another tainted verdict.

Tavoris Cloud-Gabriel Campillo
February 18, 2012- Corpus Christi, Texas
Result: Split Decision for Tavoris Cloud
Official scores: David Robertson 116-110 (Cloud), Joel Elizondo 114-112 (Cloud), Dennis Nelson 115-111 (Campillo)
Punch stats: Cloud (147/712), Campillo (187/670)
Remarks: Forget about going to the Bunny Ranch in Nevada, if a fighter ever wants to get screwed all he has to do is fight in Texas. Gabriel Campillo dominated IBF light heavyweight titlist Tavoris Cloud after surviving two first round knock downs. At best, Cloud won four rounds total, which would translate into a 114-112 judgment in favor of Campillo. However, the judges thought it was best to gift-wrap the win for the house fighter.

Brandon Rios-Richard Abril
April 14, 2012- Las Vegas, Nevada
Result: Split Decision for Brandon Rios
Official scores: Jerry Roth 116-112 (Rios), Glenn Trowbridge 115-113 (Rios), Adalaide Byrd 117-111 (Abril)
Remarks: Chalk up this screw job decision to poor scoring, right? Well that would be the case if Bob Arum’s Top Rank wasn’t setting up a huge money showdown between Rios and Mexican legend Juan Manuel Marquez. This decision manufactured a lot of outrage from the boxing media, but many “fight scribes” were quick to point out that the fix was NOT in. Those Top Rank media luncheons must be mind blowing.

The preceding list has been the true definition of a Sh-t List and now I would like to invite you to submit your personal selections in the comments section below or email your comments to theshitlist@fightclubwriter.com.
Alphonso Costello is a member of The Sh-it List Makers Association of America (SMAA). You could also find his work at www.FightClubWriter.com