Today, top lightweight contender, John Molina Jr. personally announced to The Boxing Tribune that he will be fighting Antonio DeMarco for the WBC lightweight title. 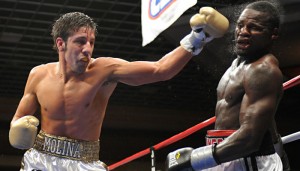 The fighter known as “The Gladiator,” when asked about the rumored match answered, “[Its] Already a done deal it was signed a couple days ago.”

The match is scheduled for September 8, 2012 as the main undercard match to the Chad Dawson and Andre Ward match at a yet to be determined location.

This fight will be DeMarco’s second defense since winning his title by stopping Jorge Linares in a come-from-behind performance that shocked the boxing world.

Molina’s best performance came when he humbled Hank Lundy, who had earlier called Molina a “dumb fighter”, with a big right hand followed by barrage of brutal punches that prompted the referee to stop the fight.

This fight has the potential to be fight of the year as both these young warriors have shown a willingness to engage in thrilling exchanges and an instinctual drive to engage in toe to toe combat.