Tomasz Adamek won a unanimous decision over a one armed Eddie Chambers in the main event of the NBC Sports Fight Night card in a bout that was far closer than indicated by the controversial scorecards turned in at the end of the night.  The heavyweight bout that was a twelve round affair from Adamek’s home base the Prudential Center in Newark, NJ in the fourth installment of the Fight Night series. 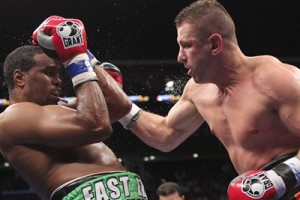 The first round started with Chambers seeming to have the speed and boxing skills advantage as he was able to counter Adamek’s forward aggression.  But, before Chambers could really establish his jab he would have it taken away. Late in the first round Chambers winced and rubbed his left arm.  As it turned out he pulled or tore his left bicep rendering the arm near useless most of the night.

Chambers relies on the jab to set up his offense and would struggle to sustain his attack the rest of the fight.  Despite fighting with one arm he was able to stay in the bout and more often than not came away from each round landing the cleaner punches.

The fight was billed as a clash of styles and that is what occurred.  From the third round on it was clear this difference in styles would make scoring the fight difficult and arbitrary.  Chambers landed the cleaner blows with the overhand right regularly landing flush to the side of Adamek’s face.  Adamek though won the turf war being the pursuing aggressor and being more active throwing flurries of punches although he landed very few clean shots with Chambers usually blocking or slipping the shots.  Toss in that the crowd was fully pro-Adamek that roared every time he sneezed and this was a recipe for debatable scoring.

Style wise Chambers was the slick boxer that circled the ring while dancing in and out to land punches while making the most of his one good arm.  At times he would move and counter Adamek with the overhand right that found a steady home on Adamek.  Chambers also moved in and out of the southpaw stance where he could use the right arm which to pound the jab.

Adamek was the aggressor and the active fighter.  He pursued Chambers and likely won points on the scorecards for his forward moving attack.  When Adamek was able to get close to Chambers without being hit with the right hand he let his hands go with combinations drawing the attention of the crowd and the apparently the judges.

The fight pattern continued in nearly identical fashion throughout.  As the rounds wore on Chambers seemed to have more gas and Adamek at times look frustrated with the inability to really land flush shots.

When the fight concluded press row scoring was all over the place anywhere from having Chambers well, several close cards each way, and several ringside observers having Adamek well ahead.  The three that mattered had it for Adamek.  Judges Steve Weisfeld and Joe Pasquale had it 116-112 while Alan Rubenstein had it a ridiculous 119-109 for Adamek.

The Boxing Tribune saw the fight 116-112 for Chambers.  In this writers opinion only so much credit can be given for aggression and crowd pleasing combinations.  At some point punches have to land.

Chambers may have been less active but he landed clean hard right hands and fast right jabs throughout the night while barely being touched by a flush shot.  In round eight Chambers landed and slipped with such ease that he encouraged the crowd to continue the “Adamek-Adamek” chants.  In round ten he opened up landing hard right hands that slowed the Polish warrior who is usually never deterred.  While it was not a robbery on par with last weekend’s big bout it appeared at least to this writer, Chambers had what should have been an impressive win considering he had one arm taken away.

In the co-feature Bryant Jennings (14-0, 6 KO) dominated a game but overmatched Steve Collins (25-2-1, 18 KO) to remain undefeated and win the USBA Heavyweight belt.  From a numbers perspective Jennings was impressive winning a unanimous decision by shutout of 100-89 on all three cards and by compu box stats landing 246 punches to 85 for Collins.

After two rounds of feeling out things began heating up with some good exchanges where Jennings landed more often and with more impact.  Then in round four Jennings began completing taking over the fight when he landed a left hook-right hook combination that sent Collins crashing only to be held up by the ropes where Lindsey Page called a knockdown.  Collins was on wobbly legs but when action resumed the round was near over.

From that point on Jennings had full control of the bout and Collins was largely surviving.  Collins left eye began to swell early on and was shut by the seventh round.  Occasionally Collins would make an attempt to hit the body.  Other than that it was all Jennings.  At several points it appeared Jennings could end things by stepping on the gas but whether it was Jennings not having the experience to finish or Collins being a tough customer the moment never came.

Jennings stunned Collins in the ninth and tenth rounds but each time it was late in the round and he was unable to finish the job.  While Jennings has been dubbed a top American heavyweight prospect including by Freddie Roach, he has still only been boxing three years and he has only fourteen pro fights.  The bar was set high after his two impressive TV outings defeating fellow prospect Maurice Byarm and then former title holder Sergei Liakhovich. He certainly has plenty of room to grow and a lot of potential.  He should benefit from an outing like this where he can go back to the drawing board and learn what could have been done to finish the job.

In the TV swing bout Jamaal Davis fought an excellent boxing match against the lively Doel Carrasquillo who is far more dangerous than what his record would suggest.  Carrasquillo has a history of losing rounds to better fighters only to land a bomb with his heavy hands and win by knockout.  Carrasquillo has several scalps of young talented fighters on his resume including a knockout of Denis Douglin.

Davis who is a veteran was not going to fall victim to Carrsquillo’s seek and destroy tactics.  Davis fought an intelligent tactical fight.  He used his jab to control the range.  He chose when they engaged landing his combinations and getting out long before Carrasquillo could retaliate.  As always Carrasquillo never stopped chasing and pursuing to land the homerun.  Davis simply was not going to have it as he stayed with his plan to maintain control of the ring.

Davis earned the unanimous decision by scores of 79-73 and 78-74 twice.  Davis improves to (14-8-1, 6 KO) while Carrasquillo drops to (16-20-1, 14 KO).  For Davis it breathes life into his career as he struggled in his last four fights going 1-2-1 against tough competition including losses to Joel Julio and Gabriel Rosado.  Tonight though he looked far better than in the last few outings getting back to using his speed and boxing skills to get into the win column.

John Thompson (8-0, 2 KO) of Newark, NJ won a unanimous decision over John Mackey (13-6-3, 6 KO) of Washington, DC by scores 58-56 and 59-55 twice.  The bout was a six round affair in the middleweight division consisting of little action as the two counterpunchers were involved in few direct exchanges.

Patrick Farrell of Jersey City, NJ and David Williams of Philadelphia put on an entertaining four rounds of heavyweight action as both men were willing to stand and trade heavy blows from the opening bell.  Farrell had Williams down in round two from a blistering one-two combination.  Williams rose with a look of being done yet he survived the round despite having no legs.  Farrell would continue to get the better of the heated exchanges the rest of way. While Williams had his moments, Farrell took the unanimous decision by scores of 39-36, and 40-35 twice.  Farrell moves to (7-1-1, 3 KO) while Williams drops to (6-6-1, 2 KO).  Credit to both fighters as they had no thoughts of playing it safe and began heating up the crowd with some good action.

Jose Peralta (9-1, 5 KO) was far too fast, too strong, and too talented for Dontre King (6-11-2, 2 KO) stopping him from a barrage of punches at 2:28 of round four of a scheduled six in welterweight action.  Peralta who fights out of a tight crouch and explodes with hooks and uppercuts had little trouble landing damaging shots against King who did not have the power to keep Peralta honest.  Peralta dropped King from a flurry of shots in round three and then did the same in round four when King went to a knee and was unable to rise.  Peralta, originally from the Dominican Republic now living in Jersey City, NJ is worth keeping an eye on.

Tureano Johnson (9-0, 6 KO) took a unanimous decision over Roberto Young (5-5-1, 4 KO) by scores of 58-56 on all three cards in a six round middleweight bout.  Johnson who is from Nassau, Bahamas fought primarily on the inside grinding his opponent to the ropes and landing hooks and uppercuts.  Young who is from Sacramento, CA was game but Johnson beat him to the punch and landed the heavier blows.

Sorry no quotes or fighter reaction.  This show ran well into the night.  I had a two hour drive home and then had to write this fight report.  At some point I have to sleep and go pay respects to dad for father’s day breakfast so skipping the post-fight press conference had to be done.