Saturday night from the Sportsman’s Lodge in Studio City, CA former WBA 122lb champ Rico Ramos (20-1,11 KO) makes his first trip back to the ring since losing his title.  In his way will be undefeated Efrain Esquivias (16-0, 9 KO). 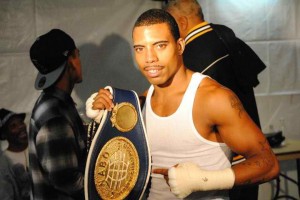 Ramos, who is promoted by Goosen Tutor and managed by Al Haymon quickly moved up the ranks to a title shot after scoring a second round knockout of Heriberto Ruiz in 2010 and a unanimous decision over Alejandro Valdez in 2011.  This set Ramos up for an opportunity to fight Akifumi Shimoda July 9, 2011 for the WBA Super Bantamweight belt at Boardwalk Hall in Atlantic City on the Paul Williams-Erislandy Lara undercard..

Shimoda out boxed Ramos early and seemed to be the quicker and better all-around fighter in the first few rounds.  Sensing some urgency Ramos starting pressing harder at the halfway point of the scheduled twelve and found more success.  Then in round seven Ramos erased any problems from early in the fight when he landed a monster left hook that put Shimoda down for the count and giving Ramos the world title.

Unfortunately for the young Puerto Rican champ the title reign would not last long as he had to face the mandatory challenger in his next bout who happened to be Cuban super amateur Guillermo Rigondeaux.  The two time gold medalist and veteran of over four hundred amateur fights Rigondeaux was a big favorite over the champ due to his skill level and vast experience.

When they met on January 20 of this year at the Palms Casino in Las Vegas Rigondeaux went after Ramos early and had his way dropping Ramos in the first round from a hard body shot.  Ramos from that point on seemed unwilling to engage.  In round six Rigondeaux pounced and set Ramos down with another body shot that kept him down this time.

Ramos makes his first appearance since losing his title Saturday.  He takes on the undefeated Efrain Esquivias who is making hi biggest step up in competition by taking on the former belt holder Ramos.  Equivias has wins over trial horses Adolfo Landeros, Fernando Beltran, and Juan Ruiz in the last year.  Ramos will be the first top level opponent Esquivias has faced.