The bitter memories of three straight losses – two of which came by way of knockout – weren’t exactly washed away when Roy Jones Jr. (55-8, 40 KOs) outpointed club fighter, Max Alexander last December. The superhuman reflexes and athleticism that carried Jones to the pinnacle of the sport in the nineties faded a long time ago. The signs were there when an overhand left from Antonio Tarver left him sprawled out under the ropes for the first knockout loss of his career in 2004, and all doubt was thrown out when he lay motionless after a Glen Johnson right hand sent him crashing onto his back just four months later. 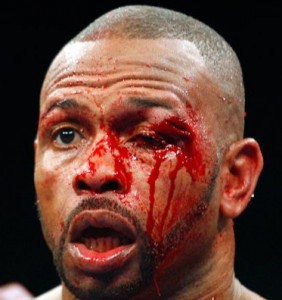 When referee Bill Clancy waved the fight off as he knelt over a motionless Jones, HBO Boxing analyst, Larry Merchant asked, “Will we ever see Roy Jones Jr. in the ring again?” Jim Lampley promptly replied mid-sentence, “Nope.”

But here we are, nearly eight years since back-to-back knockout losses signaled the end of the Roy Jones Jr. we all once loved or hated.

In 2009 he was stopped by Danny Green, a man Jones would have toyed with and embarrassed in his prime. And last May, Jones was knocked out on his feet, only to slowly crumble to the canvas and land flat on his face as Denis Lebedev landed one last right hook for good measure.

This Saturday he’s traveling to Poland and stepping back into the ring. As of now his opponent is still in doubt. He was originally scheduled to face Dawid Kostecki, the once-defeated native of Poland. But due to a recent arrest on allegations of running a prostitution ring, Kostecki is behind bars awaiting a decision on a temporary leave to fulfill his contractual agreement.

Kostecki (39-1, 25 KOs) doesn’t have a very extensive resume to pick through, but in available footage he’s shown decent speed and power, and the ability to mix his punches and catch his opponents coming in with lead right hands and left hooks. And while he has a tendency to telegraph just about every hard punch he throws, can such a badly faded Roy Jones Jr. make him miss and capitalize?

Should Kostecki’s request be denied, Jones may face Polish light heavyweight, Pawel Glazewski (17-0, 4 KOs) on Saturday night. Given Glazewski’s low knockout ratio, he is the safer opponent for Jones at this point, but a win will do nothing for his career. A loss, on the other hand, will leave him faced with ignoring the outcry for his retirement.

Jones has had his brain scrambled in two of his last four fights, and both bad knockouts have come after his 40th birthday. As stated earlier, the reflexes are long gone. You know it, I know it, and Roy Jones Jr. knows it. The man who used to possess the gift that allowed him to fight with his hands at his sides, and even occasionally behind his back, is reduced to covering up as he leans on the ropes and tries to keep his opponents’ punches from smashing through his guard. His style of defense has visibly changed as he’s aged and faded, but the sad reality is that the change in style has not helped.

Speculation of money troubles being the reason Jones can’t let go of the sport and walk into a full time job commentating at HBO Sports gives way to a potential future where he won’t be able to walk into that next career. When he isn’t occasionally tripping over himself trying to find the right word to convey his thoughts, Jones is quite good at providing insight into the action in the ring. Like many of the other athletes-turned-analyst hired by HBO, he has his critics and he has his fans. One big punch that sends his head bouncing off the canvas one too many times can change it all.

Now a stationary target lacking any serious punch resistance, Jones is a ghost of his former self. He’s one of boxing’s “walking dead”. It’s only a matter of time before he goes too far and suffers irreversible damage.

Unless you’ve been living in an Amish community for the last two years you’ve been made aware of the television show, “The Walking Dead”, based on Robert Kirkman’s comic book of the same name. As the story goes, the dead have risen to walk the earth and feed on those unable or unwilling to defend themselves against slow-moving corpses. At first glance and throughout the series’ first 23 issues, the title implies reference to the zombies who have laid waste to the human race. But the 24th issue reveals through an emotional monologue by the series’ main character, Rick Grimes, he and the other survivors are really “The Walking Dead”, living on borrowed time.

Jones is just that. He’s fighting on borrowed time. He can’t, or won’t come to the realization that he can no longer compete at an elite level, and he struggles to compete with B-level fighters at this stage of his career. He likely won’t walk away should he suffer another crushing knockout loss on Saturday night. Original plans called for a possible future fight with WBC cruiserweight champion, Krzysztof Wlodarczyk, if Jones was to defeat Kostecki. With Glazewski in the mix, those who care for Jones’ long-term health can only hope the Wlodarczyk fight has gone out the window.