Towards the end of the first round in his recent bout with Tomasz Adamek, Eddie Chambers stopped in the center of the ring, looked at his left arm in pain, and then attempted to continue fighting.  He would have zero use of that left arm the rest of the night. 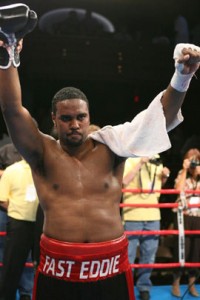 Recently it was confirmed that Chambers tore a tendon in his bicep and he will have surgery today to fix the injury.  In a recent press release from Main Events, Chambers had the following to say about what happened in that first round against Adamek on June 16.

“At the end of the first round I felt something rip. I remember thinking, hey, that didn’t feel right. It turns out I the tore a tendon that connects my bicep to the bone. I am having surgery to repair that.”

Despite the injury and having use of only his right arm, Chambers fought well against the tough Adamek, using his speed and boxing skills to land the cleaner shots.  While Chambers could not use the left jab which he relies on to set up his offense he was still able to land hard overhand rights.  Chambers also switched to a southpaw stance at times to land right jabs and lead right hooks with his one good arm.

Unfortunately for Chambers the more active and aggressive Adamek drew the attention of the judges to win the unanimous decision.  Adamek won on all three cards including an absurd 119-109 on one card, despite rarely landing a clean punch on the defensively savvy Chambers in a close and controversial fight.  Chambers out landed Adamek in punches 152 to 134 and had the edge in power punches 118 to 86.  Adamek however was more active throwing a total of 919 punches landing only 15% to Chambers throwing 462 punches landing at 33%.

Chambers, who has been plagued by random injuries causing inactivity over the last two years, is anxious to get the surgery done and get back into the ring.

“Once I have the surgery, I will do physical therapy for about 2 months. I will keep in shape physically.  You know running, and anything that doesn’t require upper body, etc. Just to stay in shape and stay ready so that once I get back it’s not going to take as long to get ready for fighting. I want to get back into a fight as soon as I possibly can after that.”