It’s a fight that has British fight fans salivating as Frank Warren finally unveiled the Ricky Burns versus Kevin Mitchell scrap, which has been signed for the SECC Arena in Glasgow on September 8th. 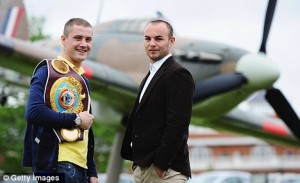 The contest has been in the works for some time, and it pitches two of the UK’s foremost fighters against each other, with Burns’s WBO lightweight belt up for grabs. Mitchell, 33-1, 24 KO’s, has been pretty inactive of late, fighting twice since suffering a curious drubbing at the hands of Michael Katsidis nearly two years ago, while Burns, 34-2, 9 KO’s, has packed in seven world title fights in the same period. It’s arguable, however, that Mitchell’s dismantling of John Murray in 2011 remains the most impressive performance of either fighter’s respective career, although Burns’s proponents might point to the Scotsman’s own outscoring of Katsidis last November as evidence that he’s the better fighter.

We’ll find out September 8th. Meanwhile, 27 year old Mitchell is ecstatic that the bout has finally come to fruition, and had some (currently) rare kind words for his promoter:

“I was over the moon when Frank made the fight; it’s the fight I’ve been desperate for and I know Burns has really wanted it, the fans have wanted it and so have the media, so it’s a dream that it’s finally on now,” He said.

“Frank’s the best promoter out there and he knows when the time is right to make the big fights and he’s made a blinder sticking me and Ricky together now, it’s going to be a right war between us, the best you’ll see this year.”

The WBO champion was equally effusive:

“The fight trade has been talking about us two meeting for a while now and it’s happening at the perfect time.” Said the 29 year old Burns.

“Mitchell is a great fighter and I’ve got to know him well outside of the ring, but it’s a shame in this business that that will have to be put aside while we’re fighting it out and there can only be one winner. For me it’s about testing myself against the best and proving how good I am. Mitchell’s the next best in Britain and I’m sure he’s going to give me the hardest fight of my career and that’s what I’m preparing for – a real battle.”