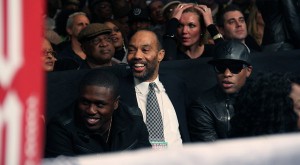 Following his exciting back and forth war with former champion, “Vicious” Victor Ortiz (29-4-2, 22KOs) in late June, Lopez capitalized off the thrilling upset victory by signing with Haymon in hopes to have a ‘money’ interim fight while waiting for Ortiz’s fractured jaw to heal. The two are scheduled to have a rematch as soon as Victor is cleared by doctors to resume fighting.

Al Haymon, the mysterious ‘go-to-guy’ of the rich and famous, is a Harvard educated power-broker who straddles the line between promoter and manager. Haymon, who has ties with huge names in both the music industry and the boxing community, is well known for guiding Floyd Mayweather out of his contract with Top Rank boss-man, Bob Arum in 2006 (paying around $750,000 to do so). The move set Mayweather up for the most profitable fights of his career and sent reverberations around the boxing world which solidified Haymon as one of the most coveted ‘associates’ a fighter could have.

Almost universally recognized within the industry for netting his fighters the most money per-performance, the long-time adviser-to-the-stars, Haymon, has controlled some of the most recognizable names in the sport including Floyd Mayweather, Andre Berto, Gary Russell, Adrian Broner, and Chris Arreola along with some other very notable talents who no longer employ his services.

For Erislandy Lara, the move to join that elite group hopes to translate into a possible showdown with the WBC Jr. middleweight champion, Saul “Canelo” Alvarez (40-0-1, 29KOs). The 21 year old Mexican has a date reserved at the MGM Grand for September 15th, but due to various boxers pulling out of the fight, Golden Boy Promotions is still on the hunt for an opponent.

Paul Williams was originally slated to face off with Alvarez but had to relinquish his position due to unfortunate injuries sustained in a traffic accident. Victor Ortiz was the second choice but is out of the picture because of his recent upset defeat to the aforementioned Josesito Lopez. Junior middleweight bomber, James Kirkland pulled out due to a shoulder injury and/or a lack of expected funds.

The extremely popular Canelo seemingly has his pick of potential upcoming opponents. In serious consideration for the September date are Cornelius Bundrage (whose contractual obligations with Don King are now over, leaving he and trainer Emanuel Steward free to deal with Golden Boy directly), the pugnacious Ricardo “El Matador” Mayorga (a very real and practical option for the young Mexican as Mayorga not only has experience against world-class opposition, but brings drama, entertainment and perhaps more importantly, name recognition to the fold) and now the southpaw boxer-puncher, Erislandy Lara’s name has to be considered by GBP as well.

Josesito Lopez’ next opponent is still being worked out but it’s a safe bet that he and Lara’s opportunities and profits margins will now be maximized by working with the highly influential Haymon.