Two super bantamweight titles will be on the line when Nonito “The Filipino Flash” Donaire (28-1, 18 KOs) and Jeffrey “The Mongoose” Mathebula (26-3-2, 14 KOs) offer up their WBO and IBF titles on Saturday night at the Home Depot Center in Carson, California. Kelly Pavlik takes on Will Roskinsky on the opening fight of the televised undercard set to begin at 10 PM EST/7 PM PST on HBO’s Boxing After Dark. 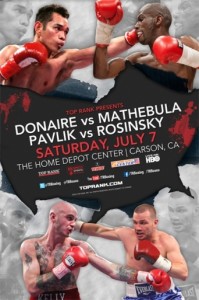 Donaire’s signature in the sport can be found on the right temples of Vic Darchinyan and Fernando Montiel. Almost four years after a picture-perfect left hook toppled Vic Darchinyan, Donaire crushed Fernando Montiel with the same punch. In between shellacking Darchinyan and Montiel, Donaire’s resume doesn’t quite pass the smell test. His opponents ranged from under-sized fringe contenders to solid B-level former titlists. Guys like Moruti Mthalane (who has since captured a world title), Raul Martinez, Rafael Concepcion, Luis Maldonado, and Manuel Vargas (who made the jump from 105 lbs. to 115 lbs. for their fight) were some of the lesser quality opponents of the post-Darchinyan era.

The pattern appears to have repeated itself after Donaire’s highlight reel knockout victory over Fernando Montiel last February. The first defense of the WBO and WBC titles Donaire took from Montiel came against super flyweight titlist, Omar Narvaez, who was making his bantamweight debut. In what turned out to be an awful style matchup, Donaire won an uneventful decision over a gun-shy Narvaez who fought to survive the full twelve rounds.

But rather than face another of the bantamweight champions (Abner Mares and Anselmo Moreno, both promoted by Golden Boy), Donaire jumped to the super bantamweight division, where he won the vacant WBO strap, his fourth world title in three divisions, with a 12-round split decision victory over Wilfredo Vazquez Jr. in February. Nearly everyone in attendance at the Alamodome in San Antonio, Texas, as well as those watching on HBO, saw Donaire as the clear winner, but ringside judge Ruben Garcia scored the fight in favor of Vazquez, who survived a timid start and a knockdown in the ninth and put up a better fight than many expected.

Mathebula comes into the fight as the clear underdog and the unknown commodity. His resume is paper thin, with his biggest win coming in his last fight against Takalani Ndlovu, which was a rematch of a split decision loss in 2010. Mathebula has fought outside of his native South Africa only once in his career, and he lost a split decision to Celestino Caballero in Panama in doing so.

The most telling physical advantage belongs to Mathebula, who is listed at 5’10”, while Donaire checks in at just less than 5’6”. Donaire will have the obvious advantage in speed and power, but Mathebula’s length will make him work to find openings to score.

Fortunately for Donaire, he’s shown a solid ring IQ and an ability to adapt his offensive strategy when he’s been stifled. At times he can be impatient, and against such a long, tall opponent with a good jab, he’ll probably be forced to use plenty of lateral movement to find a way inside of Mathebula’s reach.

Donaire is at his best when he’s countering. He’s shown time and time again a knack for catching his opponents on the way in (as seen most famously in the Darchinyan and Montiel fights). That is not to say he’s totally inept when forced to press, but as seen in his fights with Narvaez and Vazquez, a timid opponent sometimes leads to an impatient Nonito Donaire who resorts to waiting for a tiny opening that will give him the highlight reel homerun punch.

The mania surrounding Donaire’s knockout victory over Fernando Montiel set the bar for success unfairly and artificially high, but it also comes with the territory when you’re ranked one of the sport’s pound for pound best. The old, tired, and trusty saying, “Styles make fights” holds true, and not everyone will charge as hard and wide open as a Vic Darchinyan or Fernando Montiel. A SportsCenter Top 10 knockout isn’t highly likely on Saturday night, but Mathebula will provide a stiff test for the 29-year old Filipino star, and hopefully be a spring board to bigger and better fights for “The Filipino Flash”. Expect a workman like effort from both fighters, with Donaire prevailing by way of a solid late round stoppage.