It’s frustrating to see Wladimir Klitschko (58-3, 51 KOs) getting so regularly derided and dismissed by fight fans and media, but the dreary cast of supporting characters in the heavyweight division almost begs a furrowed brow and a snarky comment.

Saturday’s bout at the Stade de Suisse in Berne, Switzerland against Tony Thompson (36-3, 24 KOs), the twelfth defense of Klitschko’s IBF strap and ninth as consensus world champ, was a perfect example of the Klitschko Lament. 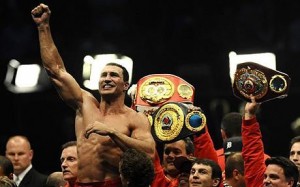 For those wondering how Thompson became an IBF mandatory for Klitschko, the strategy was simple– Fight one journeyman a year, keep himself IBF-friendly, and wait his turn for a second helping of Klitschko fist.

As for the fight, itself– A dead-legged 41-year-old Tony Thompson showed up for the farce of an IBF title fight and went through the motions for a bit before being stopped in the sixth round. From the very beginning, it became painfully apparent that Thompson had nothing and had no intention of going anywhere in this rematch of his 2008 KO11 loss to Klitschko.

The first five rounds were predictably mind-numbing, with both combatants looking like sloppy fencers trying to poke one another without getting close enough to be stabbed. There was lots of poking and prodding, but nothing of note until the end of the fifth when a big right hand from Klitschko, set up by a tap of a jab, put the American down in the corner.

Thompson managed to beat the count, but his face already bore the mark of quiet resignation and it appeared to be just a matter of time before he’d be back in the locker room, signing for his check.

The end came in the following round when Klitschko once again sent Thompson to the canvas. This time, the challenger was slower to get up and appeared disinterested in fighting on. So, referee Sam Williams stopped the contest, much to the appreciation of those uninterested in watching six more rounds.

For those who will use this farce of a fight as ammunition to diminish Klitschko or his legacy, just consider that Tony Thompson vs. anyone would’ve been just as bad. If an accusatory finger is to be pointed, point it at the IBF.