According to Richard Schaefer at Golden Boy Promotions, the upcoming IBF welterweight title fight between champion Randall Bailey (43-7, 37 KOs) and challenger Devon Alexander (23-1, 13 KOs) looks set to provide a distinct advantage to the man trying to take the belt. The fight appears set for the ScottTrade Center in St. Louis, Alexander’s hometown. 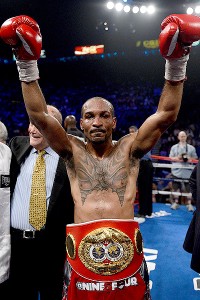 Devon Alexander came up through the club ranks in Missouri and Illinois early in his career, and in his last fight in February enjoyed the home-field advantage against Marcos Maidana, who never looked comfortable in the ring against the slick puncher. Having potentially friendly judges influenced by the home crowd in a state with a weak commission can only be a benefit for Alexander.

Meanwhile, Randall Bailey has never been one to leave it to the opinion of the people sitting ringside. Bailey has 37 knockout wins as well as falling in defeat before the scheduled distance three times. In his fights that have gone the distance, he is a pedestrian 6-4; three of the four losses were in venues that were in or near his opponent’s adopted hometown; only his loss to Ener Julio did not fit that pattern (indeed, Bailey was fighting in his own hometown of Miami but could manage only one judge in a split decision defeat.)

If the IBF wanted to send a message to Randall Bailey that he had messed up their plans for Mike Jones, short of ordering a rematch this was probably the best way to do it. On the other hand, Bailey will be forced to do what he does best; entertain the fans and go for the big knockout. That adds a level of intrigue to a title defense from a 37-year-old man who until a month ago many thought was on the pick-up-the-paycheck downside of his career. A win will make a case for Bailey as a potential dark horse Hall of Famer.