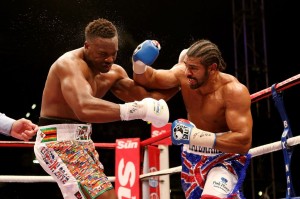 The ring entrances couldn’t have been more different as Chisora came in with this customary hooded gown and face covered by a union jack bandana as the theme to Gladiator cast an air of menace.

Haye then followed, bouncing along to his usual ‘Aint no stopping us now’ wearing not one but TWO ‘aggression red’ t shirts (one of Adam Booth’s training tricks has been to use apparel colour to inspire tactics) and a pair of trainers.

The latter seemed to suggest that Haye was going to use his speed and athleticism (weighing less more than 30lbs lighter at Thursdays weigh in) to do the damage.

And so it proved.

The first round was pretty even, Haye maybe edging it based on work rate.

The second was probably a little more clearly Hayes as he landed solidly with the right hand on Chisora’s chin but Chisora smiled through it and they ended the round snarling at each other.

It was warming up nicely.

Haye’s nose started leaking the red stuff in round 3 and he seemed to be slowing down a little, giving the pundits cause to worry that as the fight began to go deeper Haye would find himself in trouble as Chisora established himself.

Chisora didnt capitalise, though, and Haye continued to dictate the pace until the final few seconds of the third when, barbed by a clipping shot from Haye, Chisora retaliated after the bell with a huge left that left Haye reeling.

Haye came into the 4th breathing hard and the crowd sensed a turning of the tide.

The ref delayed the beginning of the round to pull Haye’s pants down (his belt line was practically brushing his gumshield) and one wondered whether Haye’s pants were going to be pulled down proverbially as thudding shots came in from Chisora.

Haye fought back in the middle of the round and a slugfest began to unfold, which brought the crowd to fever pitch.

Haye continued to use fast hands, but was using energy hitting elbows and gloves and the round closed without the drama of the previous.

The 5th would prove to be the undoing of Chisora, though, as he continued to press forward without landing cleanly.

After a sublime counter on 2:00, which landed cleanly on Chisora and saw Haye duck under the return fire, Haye unleashed fistic hell on his charging opponent with a huge left hook and follow up right 30 seconds from the end which saw Chisora take the floor and need a standing 8 count. A few seconds later Haye finished the job with a series of unanswered punches, 2 lefts, 3 rights and a final brutal left on the button that sent Chisora down again and, although he beat the count, the ref had the good sense to wave off the contest in the final seconds of the 5th round.

After saluting the crowd, Haye met his adversary in the middle of the ring and embraced him.

Regardless of the events which preceded this fight and ultimately led to its making (assuming its authenticity) there was respect and indeed camaraderie shown between the two as the announcer called the decision.

The crowd gave an ovation. The two men gave each other plaudits and hugs during the post-fight interview.

What will come next for Chisora is unclear. Equally so the fallout that may or may transpire once the British Boxing Board of Control decide how they will regard the matter.

But putting all that aside for now, Haye earned a couple of nominal titles and declared that the fight he was now interested in was Vitali Klitschko.

Haye suggested that Vitali would want no part of him after the performance he had just given.

That ,again, remains to be seen. Haye has clearly got explosive speed and can down a strong opponent with a good chin but Vitali is not Chisora and it should be noted that Chisora lasted against Vitali mainly because of the Ukranian’s shoulder injury which left him without his biggest weapon for 9 rounds.

Haye doesn’t have granite in his beard and anything solid landing on the Brit’s chin is likely to cause an explosion of unconsciousness in his brain.

It’ll be a question of whether Haye can turn up with 10 good digits below his ankles, avoid the incoming fire for long enough to put enough hard, fast combinations on Vitali to do what noone else has been able to and knock him down and out.

Or potentially Haye’s ripping punches will expose Vitali’s achilles heel, his unstable skin, and result in another cuts based stoppage.

It’ll be Vitali’s last fight. He is 40, he has a bum shoulder and aspirations to be a politician in his native Ukraine.

If Haye wants to be recognised as a true world champion he’ll never get a better opportunity to beat a Klitschko and it might even generate a rematch against the younger brother.

Either way, the only way this sage resolves itself is when Haye and Klitschko get themselves in the amphitheater and duke it out.

Thumbs went up for on this one. The next one might see them drawn across the throat.