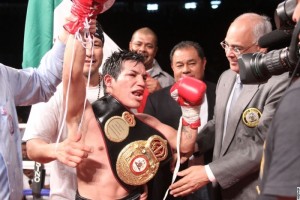 Lumacad looked like he could fight, but never actually bothered to give it a shot. Instead, he fought in perpetual retreat and played prevent defense for the entire contest.

Marquez, with a big-money bout against Brian Viloria on the horizon, never went after Lumacad and never let his heavy hands loose on his safety-minded opponent. The end result was a real stinker and some very dissatisfied fans in Culiacan, who had packed the place for a celebration of their very own Julio Cesar Chavez’s 50th birthday.

The judges’ scorecards were odd: 97-94, 96-94, and 95-95. How the defense-minded Filipino won more than two rounds, at most, is a mystery. The Boxing Tribune scored the bout 98-92 for Marquez and could easily have scored it a shutout.

Marquez moves on to a possible Viloria bout in the Fall and a pending decision on whether he has to give up his WBA flyweight title for not facing mandatory contender, Juan Carlos Reveco.

On the undercard, former super flyweight world titlist, Tomas Rojas (39-13-1, 26 KOs) bludgeoned game, but heavy-baggish Colombian, Manuel de los Reyes Herrera (19-10-1, 13 KOs), scoring knockdowns in each of the first two rounds before ending the bout with a neck-snapping uppercut in the fourth.

Herrera was in bad shape after the final blow, requiring emergency medical attention. However, he was said to be responding well minutes after the knockdown.