Boxing Tribune 5th ranked junior lightweight Juan Carlos Burgos (29-1, 19 KOs) will be the test of a lifetime for undefeated prospect Cesar Vazquez (25-0, 16 KOs) when the two men meet in Laughlin, Nevada at the Edgewater Casino on ESPN2 Friday Night Fights. In the co-feature, fallen star Prenice Brewer (16-2-1, 6 KOs) looks to keep the shattered remnants of his career from dissolving away completely as he takes on soft-punching but slick Aaron Martinez (17-1-1, 4 KOs) in an eight round welterweight event. 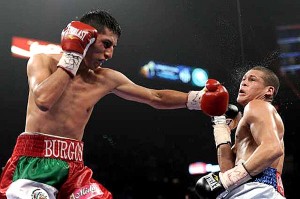 Juan Carlos Burgos is now five fights into a comeback from a loss in his only world title shot, when he went to Japan and got the short end of a decision against WBC featherweight champ Hozumi Hasegawa. Now four pounds up the scale, Burgos started his comeback on ESPN2 in February of 2011, beating a severely overmatched Frankie Archuleta, who now exists purely as a punching bag for up-and-coming fighters (Archuleta has now lost three straight by KO.) Wins over Gilberto Sanchez Leon, Luis Cruz, and again on Friday Night Fights against Cristobal Cruz in February of this year have Burgos rocketing up the charts with only the champions in front of him in the Tribune’s world rankings.

Cesar Vazquez is undefeated, but all of his fights have been in Mexico and most of them have been against very, very weak competition. To step in with Juan Carlos Burgos may very well be a bridge too far for the Mexicali native; Vazquez may well have no idea what he is in for. Expect Teddy Atlas to hammer the point home. This is a guy who has beaten a bunch of nobodies stepping in against a somebody. A win would instantly make Vazquez a player at 130 and possibly set up a title shot. A loss, unless it is in “you have got to be kidding me” embarrassing fashion, will harden him as a fighter and expose the holes in his game that he can fix going forward as he reboots his career and fights guys more his speed. If nothing else, this is an intriguing fight for that reason.

Meanwhile, what of Prenice Brewer? Fans were treated to a classic case of a guy who talked a great game getting his ass handed to him when Patrick Lopez “flipped out” (as Joe Tessitore put it when Lopez did his signature backflip celebration after a third-round TKO) against Brewer on FNF in 2010. Brewer went on to beat undefeated 14-0 Emmanuel Taylor by split decision, then followed that up with a unanimous decision loss to 16-0 Ronald Cruz in his last fight a month and a half ago. Before the Lopez fight, Brewer was best known as a semi-prospect who had built his record against soft touches; he owns two wins over a guy named Reggie Sanders, who is now 12-45-4 in his career. In neither case did Brewer have enough power to end the fight before the six round distance, and Sanders has been knocked out twelve times in his career.

As such, this may be more of a test for Aaron Martinez than it is for Brewer. Martinez is best known to FNF fans as the guy who got people to shut up about Joseph Elegele, handing the African his first pro loss on the undercard of the Anthony Dirrell-Kevin Engel joke of a fight on FNF the week after the Wolak-Rodriguez card. Martinez has as his lone loss a guy named Abdon Lozano, who started his career 6-0 before getting brutally stopped by Jermell Charlo in Chicago in December of 2009; Lozano has not fought since.

The question becomes one of whether Martinez has enough punching power to follow the blueprint Patrick Lopez laid out two years ago. Brewer has a very, very questionable heart; under sustained assault on the inside, Brewer’s will to fight has a tendency to go on him, and he has yet to prove he can take a punch. Aaron Martinez has four knockouts. His style may not be to attack as relentlessly as it takes to stop a guy like Prenice Brewer. This has the potential to devolve into a potshotting contest, a bore-the-audience-to-sleep kind of fight that will leave some reaching for the remote. It will be interesting to see if Martinez can slip out of his comfort zone and do what he has to in order to win.

Friday Night Fights airs July 20th on ESPN2 and ESPN3.com, at 9 PM Eastern/6 PM Pacific time. The Boxing Tribune will have a full recap of the night’s televised events, including any swing fights that make air, following the conclusion of the broadcast. Keep it here—we’re the worldwide leader in covering the Worldwide Leader.

Fox Doucette covers Friday Night Fights for The Boxing Tribune. His weekly column, The Southpaw, appears on Thursdays. Fan mail, hate mail, and a can of Monster for getting through the co-feature can be sent to beatcap@gmail.com.